Translated from the German by Isabel Fargo Cole

After the waning of the winter dawn, the power station vaunts its lights far across the plain, the ghosts have dissipated with the grey air: or they have dissolved in the brightness which still makes the lamp-beams yonder seem like stars at this distance; it is a brightness which dulls the gaze and floods it, watery; in the vanished night the lamps shone, but now they begin to sting. Far beyond, far past the flat fields, the fog lies again, long tracts filled with fog, with nothing but fog.

Over there I am the only one, in my company alone I searched the terrain in the fog, I alone blind my eye on a key rusting in the lock of a warped door.

I was driven by the thought that they had only built the new power plant because the old factory could no longer be found in the fog. Prowling around the sooty, red-filthy walls, which vanish from sight halfway up the lower windows, I thought I too would fade into dull white unreality until at last I opened the door and stepped inside. The old production halls, their sad bewildering emptiness, seemed strangely familiar to me; the lamps, fed by residual current, waste electricity—some barely conductive wire must have reached to the power station’s generator—glowed with a flickering, often failing light in which the shadows of the tilting rusty trestles once traveled by the conveyor belts spread out and contracted again. I walked on beneath them, climbed gingerly over slippery train tracks, steered clear of the iron stairs which led upward, groped down a dark connecting passage toward a ticking noise which swelled, proliferated, until I reached a hall in which water ran and dripped from the walls, from the ceilings, in countless places. After a while this noise almost deafened me; the floor was covered with water, getting deeper the further I went; I did not dare go near the walls, where obstructing wires and open fuse boxes were drenched in the wetness, for here too the lights still burned. Many of the windows could still be seen to face outside, into the open air; they were covered with manifold dense layers of cobwebs which glittered with moisture, but sometimes the panes, shattered into spearheads, gave a glimpse of the milky, impenetrable fog wall. When I left the room, I thought I should be moving away from the dripping noises, but I was mistaken; the further I went, the more water I heard, sometimes a slapping and splashing in the labyrinth of the rooms, often a crashing as if solid matter were washing from the vaults; the water from myriad greedy pipebursts flooded through all the walls. It is growing colder and colder, rime glimmers dull reddish-white on the walls. More and more rubble on the floors of the rooms, damming up the dark, freezing water, sometimes enigmatic corroding machine parts. At some point, inevitable, the slip on the wood of rotting crates, no end of falling flat, scrambling up, unconscious fright, flailing arms, panicked animal attempts to rise, then hunching on the ground like a wounded frog, the gradual realization that it is impossible to get up again, while the light bulbs fume darker and darker. And now the inaudible singing of thin ice spinning across the water, of frost straining through the stale darkness, the sound of steps moving away, in a side passage, a groping stored over the years by the dry rot in the walls, the steps in other halls, sometimes louder, sometimes deathly silence. Steps, a scraping, quite clearly a voice saying a sentence impossible to understand. Repeated several times, the echo of half a word, just the last vowel of a word.

The recollection that, just as I entered the first hall, the door closed behind me, the key was turned. Vivid memory of the harsh scrape of the bolt, which had not made a sound when opened from outside. I feel my age, that it was I who shut me in, the ancient man locked up in here, here I will be re-produced, will be turned back into my father, into my grandfather, into my forefather, I see it in the slack, leathery skin of my face, white beard stubble, sweat-drenched, fog in the snow of my hair, cobwebs in my brows. And soon, with a rusty screeching din of which nothing is heard outside, the conveyor belts begin to move; haltingly at first and then with increasing smoothness they carry the black earth to the presses, which let out tortured howls before performing with creaks and groans the stoic monotony of their work.

A winter begun deep in the past, beyond the plains where it cannot escape the fog, equally ancient ice slowly melts and slowly freezes over, its motionless trickle hangs cold and torn from the burst pipes, no breath of warmth to flush the glitter of death from the walls, thaw the mountain of fog, the stoker lies crushed by his coal.

Wolfgang Hilbig has become one of Germany’s most important living writers. His early work, of which the piece here is typical, stands as one of East Germany’s richest literary legacies. This year he was awarded Germany’s Büchner Prize for his life’s work. The only major work of his to appear in English was the novella Knacker’s Yard, published several years ago in Grand Street (Issue 48). In 1985 Hilbig moved to West Germany but has remained a profoundly East German writer. (5/2003)

Isabel Fargo Cole’s translations have appeared or are forthcoming in Archipelago, Crab Orchard Review, and The Missouri Review, and she has translated two books for Vitalis Verlag in Prague: Rainer Maria Rilke’s Two Prague Stories (2002) and The Golem by Gustav Meyrink (2003). A story of her own appears in the current issue of The Antioch Review. (5/2003)

Wolfgang Hilbig (1941–2007) was one of Germany’s most important contemporary writers. His early work stands as one of East Germany’s richest literary legacies. In 2003 he was awarded Germany’s Büchner Prize for his life’s work. His only major work to appear in English in his lifetime was the novella Knacker’s Yard, published in Grand Street 48. Hilbig moved to West Germany in 1985, but remained a profoundly East German writer until his death from cancer at age sixty-five. He is buried in the Dorotheenstädtischen cemetery in Berlin.

His AGNI story “The Abandoned Factory,” translated by Isabel Fargo Cole, was reprinted in Harper’s in July 2003. 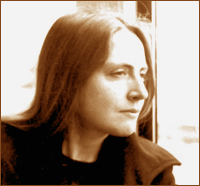 Isabel Fargo Cole is a U.S.-born, Berlin-based writer and translator. Her translations include The Jew Car by Franz Fühmann (Seagull Books, 2013), All the Roads Are Open by Annemarie Schwarzenbach (Seagull Books, 2011), and Boys and Murderers by Hermann Ungar (Twisted Spoon Press, 2006). She is the initiator and co-editor of no-mans-land.org, an online magazine for new German literature in English. Her translations have appeared or are forthcoming in Archipelago, Crab Orchard Review, AGNI, and The Missouri Review, and she has translated two books for Vitalis Verlag in Prague: Rainer Maria Rilke’s Two Prague Stories (2002) and The Golem by Gustav Meyrink (2003). A story of her own has appeared in The Antioch Review. (updated 6/2013)

Her translation of Wolfgang Hilbig‘s “The Abandoned Factory,” first published in AGNI, was reprinted in Harper’s in July 2003.