AGNI* first published this essay in 2016 by contributing editor Oksana Zabuzhko, one of the guiding lights of contemporary Ukrainian writing and publishing. —The Editors, March 2, 2022*

“Within the past few months, Ukraina, a nation unknown to the West, has come into the forefront of the world’s attention. Most people, I think, are prepared to say that they know little or nothing about it. For this deficiency in knowledge they need not blame themselves. There are good reasons for it. The suppressors of Ukraina took care that she be unknown; they indeed denied that she even existed. It would be difficult to imagine anything more reprehensible than this silencing of a nation which by ancient right belongs to the European family of nations. But uncontrollable events have now brought Ukraina into the international arena.”

These words are not from today’s media: the quotation is seventy-five years old. It belongs to British journalist Lancelot Lawton. During the 1930s, with the smog of totalitarianism thickening over Europe, Lawton was trying to open the eyes of the British public to the importance of the “Ukrainian question” in the forthcoming and unavoidable (as he wisely foresaw) battles in Eastern Europe. Though he delivered a special address on the issue in the House of Commons, Lawton’s message passed unheard. The West completely missed his “Ukrainian lesson” and crossed Ukraine off its list for many decades. Nor did the re-appearance of the country on the political map in 1991 help to make it more recognizable: there is simply no room for Ukraine’s story in the Western narrative as long as the “Soviet story” (to use the title of Edwins Snorre’s famous film) goes unrevised.

The problem with history, however, is that, when its lessons are overlooked, history sends the careless students back into the same classroom, to retake the exams they once failed. And that’s exactly where we are now—with our unlearned lessons from the twentieth century and our incapacity to recognize in what we watch and hear in today’s news from troublesome regions (of which, notably, there are more and more!) a revival—or, more than once, a linear continuation—of the same historical plots that for decades have been deleted from our cultural memory. We face them blind and deaf, unable to grasp what’s going on.

It’s a big temptation for a writer to play with counterfactual history, to re-plot events as if some big moment had turned out differently. For years my personal obsession—quite a masochistic one, I have to admit—has been to picture a world in which the Ukrainian People’s Republic of 1918–1920 didn’t collapse under the Bolshevik invasion, and Ukraine, along with Poland and Finland, managed to preserve its national independence and cultural identity, rather than transforming into the drowned Atlantis of the European subconscious. One thing can be said for sure: the world would’ve been a different place—and, in all likelihood, a better one. A lost country is, after all, more substantial than Bradbury’s butterfly, and the multiple lacunae produced in the contemporary Western mind, with all things Ukrainian missing from it, remind me of a CT scan of a brain struck with atherosclerosis: the risk of developing stroke is extremely high. The problem is, to see “the holes in the picture,” one has to be Ukrainian. And Ukrainians aren’t particularly good at communication. For decades it’s keeping silent, not speaking, that our survival instincts have taught us.

One hundred years of our solitude—of our cultural non-existence, in the view of the outside world—has left my generation of writers with a sense of irreparable damage. Even when appearing now on the international stage, we are doomed to remain, at best, half-understood, like tongue-tied cripples, because the cultural context we belong to remains invisible to the non-Ukrainian public. When asked to name in the Amazon authors’ questionnaire which works in my genre I admire and envision as my predecessors, I choose to limit myself to The Man Without Qualities, The Alexandria Quartet, and Life And Fate, but I have to skip the Ukrainian tetralogy Richynsky Sisters by Iryna Wilde (1907–1982) from which I first learned how major historical events could be depicted from a woman’s standpoint. My Ukrainian literary mothers aren’t included in international reference books, and there’s no point in trying to explain yourself by means of another unknown… Later, reading an enthusiastic review of my novel by an American critic, I couldn’t help but shudder at the seemingly praising lines: “This is especially impressive because as far as my ignorant mind was concerned, it came out of nowhere” (http://languagehat.com/the-bookshelf-the-museum-of-abandoned-secrets/). That’s precisely the moment when you feel you’re talking to the smiling spectators from behind a glass wall.

Behind this wall, Russian troops came to kill us in full view of the whole world, the same way they did a hundred years ago. And the world watched, stupefied and lost in guesses: shouldn’t there be a rationale justifying, at least partly, such behavior? After all, the Russian, a.k.a. Soviet, story sounds familiar, and that story drags a whole set of instantly identifiable images with it. On the Ukrainian part there’s nothing in the least comparable… and the storyteller takes all—no matter whether his story is true or a pack of lies.

That’s how we come to learn that for a free nation the strategy of survival is in fact to speak, not to keep silent. Today’s Ukrainian literature is struggling to put into words the most burning human material possible: the reality of war. And it’s in this struggle that our century-old Atlantis, once drowned in blood, is suddenly resurfacing for us in all its painful, tragic beauty—its prophets and martyrs, dead geniuses and forgotten heroes giving new dimension to the close-ups of history now appearing before us at accelerated speed, calling for new accounts and new portrayals. It looks as if, rediscovering their identity in the war of independence, Ukrainians have finally discovered how much they have to tell the world.

If only, this time, the world will listen. 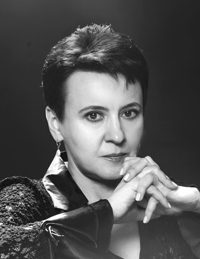 Oksana Zabuzhko, a contributing editor of AGNI, is Ukraine’s major writer and intellectual. She is the author of more than twenty books of poetry, fiction, essays, and criticism, and is known internationally for her novels Field Work in Ukrainian Sex (1996), a portion of which first appeared in English in our pages, and The Museum of Abandoned Secrets (2009). Her books have been translated into some twenty languages and won many awards, including the Angelus Central European Literary Prize (Poland, 2013). She lives in Kyiv. (updated 6/2016)

“A Conversation with Oksana Zabuzhko” by Halyna Hryn appeared in AGNI 53.