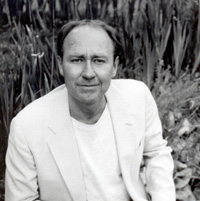 Mark Irwin is the author of seven collections of poetry, including White City (BoA Editions, 2000), Bright Hunger (BoA Editions, 2004), Tall If (New Issues Press, 2008), and most recently Large White House Speaking (New Issues, 2013). His latest project, American Urn: New & Selected Poems (1987–2013), is forthcoming in 2014. He has been awarded four Pushcart Prizes and fellowships from the NEA and the Fulbright, Lilly, and Wurlitzer Foundations. He lives in Colorado and Los Angeles, where he teaches in the PhD in Creative Writing & Literature Program at the University of Southern California. Read a 2013 interview with Mark Irwin. (updated 10/2013)