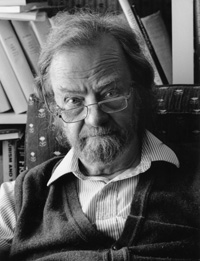 Donald Hall (1928–2018) was the fourteenth Poet Laureate of the United States. He published over twenty books of poetry during his lifetime, as well as criticism, memoirs, sports journalism, children’s stories, plays, and reviews. His numerous awards include the Frost Medal, the Ruth Lilly Prize, the National Book Critics Circle Award, and the Lamont Poetry Prize. On March 2, 2011, President Obama awarded him the National Medal of Arts. He died on June 23, 2018, at his home in Wilmont, New Hampshire.

Hall’s poem The One Day was reviewed in AGNI 47 by Chris Walsh.

“An Interview with Donald Hall” by Chard deNiord appears in AGNI 71.