The shaman comes to the valley after midnight
Circling our boarding house. Pinned to our small beds
In terror, we listen to the clean music of bones.
Later, through a rift in the curtain, we squint into the mist
But cannot see the past from a man
Blowing the trumpet of a suicide’s hollow shinbone.

Twenty years will pass before I understand this music
Robbed from a grave. Sleepless in the new world,
Listening to the laboring salt trucks make rounds
On the frozen streets, it will come back to me
All at once: the echo chamber of the creaking bamboo
Grove where we smoked our first cigarette,

The army of deaf and mute in the village who spoke
Only in obscene gestures, the lonely daughter
From the herbarium who wrote letters to us
In a hen’s scrawl. The old house replaced
By something modern, architecture standing in
For a woman’s death. Her husband’s slow breakdown

Coursed for months, the clocks telling him to jump
Off a cliff, the second marriage hurried in mourning.
The white seed of lunacy sleeps, then swells to its fate.
But all our fears of summer snakes & rabid dogs,
Everything depended on them granting us safe passage
Through fields redolent with the smell of semen

After a night of rain. Caught in the downpour,
We stood under eaves of caves. The wind churned,
Some vegetation pushed up lightless from the silver-blue
Mud. We hollowed hovels out of lantana brambles
Where we spoke in the voices of already grown men.
In winter, I traveled down as the coiling roads of the world

Grew dark. I held my insides, bile-soaked, where joy
Trembled. Prospect of home washed in the retch
Of anxiety. My history of nausea in the cold half-
Light of childhood, where did it come from? Mother,
Or the long descent in the old manner of hell—
The asphalt frozen, slippery all the way home.

The shaman returns the next morning for alms,
Turmeric, rice, strip of black cloth. We circle him,
The mystification undone in daylight. Just a man bruised
From the cold, with children starving somewhere
In the mountains across the border, as we sit here
Goading him to reveal to us the singing bone. 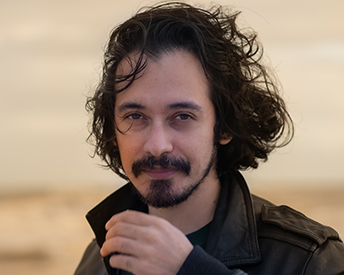 Rohan Chhetri, recipient of a 2021 PEN/Heim Grant for translation, is the author of Slow Startle (The (Great) Indian Poetry Collective, 2016), which won the Emerging Poets Prize, and _Lost, Hurt, or in Transit Beautiful _(Tupelo Press, forthcoming 2021). His poems have appeared in The Paris Review, Revue Europe, and New England Review, and have been translated into Greek and French. (updated 7/2021)