Translated from the Russian by Andrew Wachtel

There’s nothing more powerful than pre-dawn melancholy. It oozes like a dirty light from the east, filters through the shutters, and everything—the trees, the garden, the birds—seems like the survivor of some catastrophe that transforms any beauty into poverty, waste, and irreparable destruction. The evening darkness arises in the east when the west is still pierced by light. Looking to the east you’ll see that it always harbors the taste of death; at least it seems that way to me.

Snow is falling—snow is always falling here, a simulacrum of snow in any case, even during the short summer. That is why the abyss, despite all expectations, is not black. So, from the end of May, a person like me begins to count the days backwards—to make some mental notches. The cherry blossoms are falling (another snow rehearsal). The birch leaves have darkened to a deep green: winter is approaching. Have you ever noticed that in central Russia the sky is white for the most part, without any breaks? There isn’t even a mix of grey, not to mention blue—a straight path to insanity. It’s like spending your days in prison.

You start to contemplate acquiring a dog, a cat. Or even a potted plant. (When you were younger you didn’t think about anything.) You go to the store and think: Do I need another useless thing in the house? What will happen to the cat? How long will it take for the plant to die of thirst?

When I was eleven, I became passionate about fishing. I fished with a fold-up bamboo pole, with goose-feather bobbers that I bought for five kopecks in the local store. I made my own sinkers. I’d hop on my bicycle and head off to the nearest ditch or quarry where there were all kinds of little fry.

In the summer my family packed me off to relatives in the Crimea. My cousin, of whose whereabouts I now know nothing at all, was three years younger than me. We would take our poles, and at around four in the afternoon we’d head toward the reeds beyond the houses.

Of course even then I guessed that the fish suffered, but only in the way a healthy person imagines the sufferings of a sick one, before the tables are turned and they switch places.

The silver little minnows almost always bit, regardless of rain, heat, or other angling prejudices. And soon our bathtub was filled with fish. We threw them bread rolled in sunflower oil and we changed the water, but even so every day we would find two or three of them belly up. Long threads extruded from their gentle stomachs, and my triumph was darkened by an instinctive inner chill.

I was getting closer to death, but I could not yet know this—I had still not learned. A wonderful thing about youth is that it gives the illusion of triumph over death, or at least the idea of a temporary escape from it. And my cousin and I continued our expeditions into the reeds, having thought up a simple trick: we would just throw the fish right back into the little lake.

Everything went well until the day I caught a small, shiny carp, about the size of my palm. Its skin was the not the same as on all the others: there were unusual little scales of various sizes, distributed unevenly across its body. I pulled it out of the water, and when I finally managed to grab the fish as it twirled in the air, I jumped backwards as if I’d been burned. The hook had not caught in his mouth but had rather gone through one of his eyes.

It was only years later, having long since read the Hemingway story in which a tribe chases down an old elephant and a little boy, who sees the elephant die, understands everything and comes to hate his father, that I would feel a dull inner howl when I, a grown woman fishing in the Caribbean Sea caught a blue marlin, a proud and gorgeous fish that would not give up despite losing its battle with human meanness. It was only then that I threw away my expensive rods and even began to avoid beetles on the road.

But then I was still too young, which does not give me the right to evade judgment—the actions of children and adults should be weighed equally. And they have to answer equally, without any bargaining or age-based discounts.

An eleven-year-old adolescent tried life on for size and found herself in the midst of a deafening silence. It was an emotional shock, like losing your way in the mountains in a blizzard, or tossing in the midst of a stormy sea when you come to the top of a wave and realize that there’s no way back and you’re left face-to-face with your own fate.

I had to make an adult decision. Either smash the fish’s head against a rock at the water’s edge in order to put it out of its misery right away, or throw it onto the sand, the way a lot of fishermen do, not getting too caught up in the world’s misery. And there it is, right in front of me, freeze frame, my hand reaching out but the victim still untouched. It’s that tiny window of time at the execution which always made the biggest impression on me. The horror not of an action itself, but of the anticipation of the action.

Do it, just one blow. But what if I need more than one? What happens if it doesn’t want to die immediately?

Desperately I grab at the hook. The metal won’t give and with each pull it sinks deeper into the flesh. The fish is sliding in my hand and I drop it several times into the stinking grey algae. By now, although perhaps we haven’t changed places, we’re suffering equally. Frantically I grab at the hook, not even trying to pull it out anymore, only hoping somehow to put an end to this. The flesh gives way and some kind of pinkish-foamy stuff remains on the hook’s barb. Grimacing, sobbing, I clean off the goop on the sand and turn the fish over as if hypnotized. Where the eye should be there is emptiness, a black hole. That wound is my wound. My cousin’s off to the side, leaning forward a little on bent knees. Did he even see what had happened? It looks like he’s carefully watching his bobber.

The moment stretches endlessly in time and space, but I want to dissociate myself from it, to pretend I had nothing to do with it, do you understand? I want to unburden myself of what I did. To hide, to whitewash it all. I grasp the fish and lower its maimed body into the water, sincerely hoping that, perhaps, it will recover. After all, I read that fisherman have caught fish with pieces of harpoons in their bodies.

Precisely how it will recover, I prefer not to think about. To think about that you have to have a different kind of makeup. Otherwise you simply lie there scrunched up on the shore of the lake.

The fish just sits there in the shallow water for a moment, immobile. Some minutes burn by. Well, okay. I push it with a dried reed. And the water is not red. Why isn’t the water red?! And then, suddenly, rolling on its right side, the fish swims off into deeper water. And I don’t see it anymore.

Even today, when writing about this, I don’t see the fish—it has turned into a symbol. The incident burned itself into my memory. I’ve always wanted to write about it, started, and then stopped. I could never find the words, and even now I’m not sure I have.

That swamp was drained long ago, the apartment we went to during the summer must belong to other people now, and I don’t even know if my cousin’s still alive.

Anzhelina Polonskaya was born in Malakhovka, a small town near Moscow. Paul Klee’s Boat, a bilingual edition of her latest poems, has recently been released by Zephyr Press. Polonskaya’s work has also been translated into Dutch, Slovenian, Latvian, Spanish, and other languages. She lives and works in Malakhovka. (11/2013)

Andrew Wachtel is president of the American University of Central Asia in Bishkek, Kyrgyzstan. Previously he was dean of The Graduate School at Northwestern University. He is a fellow of the American Academy of Arts and Sciences, a member of the Council on Foreign Relations, and an active translator from multiple Slavic languages. (11/2013) 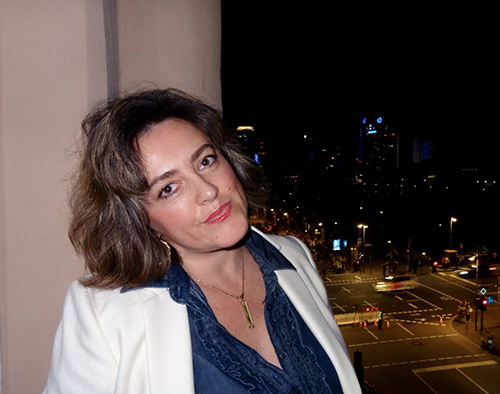 Anzhelina Polonskaya is the author of four poetry collections. Those available in English include To the Ashes (Zephyr Press, 2019) and Paul Klee’s Boat (Zephyr Press, 2013), which was shortlisted for the Best Translated Book Award and the PEN Award for Poetry in Translation. She has been awarded a Rockefeller Fellowship and a Marguerite and Lamar Smith Fellowship for Writers at the Columbus State University in Georgia. In 2016 she won the Words on Borders festival’s Freedom Prize. Polonskaya has published translations in World Literature Today, Descant, AGNI, Kenyon Review, Modern Poetry in Translation, Poetry Review UK, The American Poetry Review, International Poetry Review, Boulevard, The Iowa Review, The Massachusetts Review, and elsewhere. Polonskaya’s work has also been translated into Dutch, Slovenian, Latvian, Spanish, and other languages. Born in Malakhovka, a small town near Moscow, she now lives in Dortmund, Germany. (updated 04/2021) 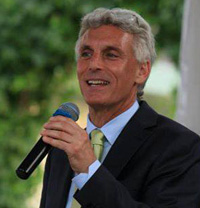 Andrew Wachtel is director of Compass College of Art and Design in Bishkek, Kyrgyzstan. Between 2010 and 2018 he was president of the American University of Central Asia in Bishkek. Previously he was dean of The Graduate School and director of the Buffett Center for International and Comparative Studies at Northwestern University. He is a fellow of the American Academy of Arts and Sciences, a member of the Council on Foreign Relations, and an active translator from multiple Slavic languages. His book of translations of the Russian poet Anzhelina Polonskaya, Paul Klee’s Boat (Zephyr Press, 2014), was shortlisted for the PEN Poetry Translation Prize. (updated 4/2021)
Read more about this translator
Share on Facebook
Share on Twitter
Print page
Follow AGNI on Twitter Follow AGNI on Facebook
Back to top