Translated from the Spanish by Jorge Luis Flores Hernández

I remember my father walking away from the crowd where lemonade was being served. At the beaches or parks he always had a reason to get away from us, as if children made him crave solitude and he had to find peace elsewhere.

I can see his face silhouetted in the frame of the door, smoking listlessly, the dull routine of an addict who has long stopped enjoying the vice. He never took off his tie. For him, vacations were the time when he didn’t care if his tie got stained; he just put on another one when he went back to work.

I guess he never adapted to us. He paid attention to us with the languid compliance of someone putting blue drops in an aquarium.

The sun also bothered him. It made his red-haired forearms freckle. The only thing he enjoyed about a trip was the journey itself, the many hours in the car. He liked to sing a song about a racehorse. The horse always lost, but his voice sounded happy and free.

I don’t recall him being interested in photography, but the pictures we found many years later must have been his. He was sufficiently close and sufficiently distant to photograph us. I was too young to be interested in his hobbies, and I don’t know if he had one camera or many. It is not strange for a father to take pictures of his family; it’s an activity that no one notices. When I look back, I imagine him owning one of those cameras that hung from the shoulder and had a leather case.

The pictures we found depict forgotten gardens and houses where we might have slept one night on the way to some other place. Back then we were blonder, whiter, more ancient. A pale time, before color photography became emphatic. Those undecided colors, where a blue car seemed grayer than it was, evoked my father.

The shots depict objects that only would have interested my father. The benches, the lampposts, the rooftops, the cars—especially the cars—survive more concretely than we do. Certain skewed or blurred pictures seem to have been taken from a moving car.

One afternoon, my father got in his Studebaker, and we never heard from him again. The last and defining fact tying these photos to my father is the absence of pictures afterward.

We found the photos in the house’s attic, inside a strapped bag, covered with stamps from hotels we had never been to. I guess he left them there so we could get to know him in a different way, so we would know how bad a photographer he was, how frail his pulse was, how the absence of concentration defined his gaze.

Is it possible that the author of these photographs is someone else? I don’t think so. The clumsiness, the fleeting attention are a clear signature.

My father looked for something missing, or something that was never there. He didn’t find what he was aiming for, yet he didn’t stop reloading the camera. His eyes, which were not made to see us, wanted to see us.

Of my father, we know only the worst: he ran away. We were the inconvenience he wanted to avoid. The photos prove how difficult it was for him to see us. Funny enough, they also show he tried. With the obstinacy of the mediocre, he repeated his failure without drama.  We never knew if he suffered. We didn’t even know he took pictures.

One afternoon he got in the Studebaker. I guess he sang his horse song, over and over, until in a desolate turn he at last won one race.

Juan Villoro is a Mexican writer, journalist, and translator. He has written more than thirty books in a wide range of genres: chronicles, essays, plays, novels, short fiction, and children’s literature. As a translator, Villoro has brought into Spanish works by Graham Greene, Truman Capote, Arthur Schnitzler, and Georg Christoph Lichtenberg. He has been a visiting professor at Universidad Autónoma de Madrid, Universitat Pompeu Fabra, Yale University, and Princeton University. (4/2017)

Jorge Luis Flores Hernández is a 24-year-old Mexican writer and translator. He has published several short stories in the collections Poquito porque es bendito and Para leerlos todos as well as in the magazines Alternativas and Dédalo. “The Bad Photographer” is his first published literary translation. (4/2017)

Juan Villoro is a Mexican writer, journalist, and translator. He was born in Mexico City on the 24th of September, 1956. He studied sociology at the Universidad Autónoma Metropolitana. Villoro has written more than thirty books in a wide range of genres—chronicles, essays, plays, novels, short fiction, and children’s literature—covering a variety of topics, from history, Mexican culture, and literature to soccer. He has received several awards, including the International Board on Books for the Young Award (1992), the Xavier Villaurrutia (1999), the Herralde for Best Novel (2004), the Vázquez Montalban International Journalism Award (2006), the Antonin Artaud (2008), and the Ciudat de Barcelona (2009). The majority of his work remains untranslated—the only book available in English is his story collection The Guilty. As a translator, Villoro has brought into Spanish works by Graham Greene, Truman Capote, Arthur Schnitzler, and Georg Christoph Lichtenberg. He has been a visiting professor at the Universidad Autónoma de Madrid, Universitat Pompeu Fabra, Yale University, and Princeton University. (updated 4/2017) 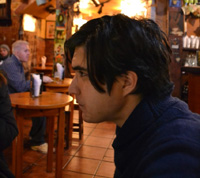 Jorge Luis Flores Hernández is a Mexican semiotician, writer, and translator currently living in Tallinn, Estonia. He has published short stories in the anthologies Vampiro y otros cuentos, Poquito porque es bendito, and Para leerlos todos, as well as in the magazines Alternativas and Dédalo. He has won first and third prize in the National Literary Contest of the Tecnológico de Monterrey and first prize in the Literature Awards of León. (updated 3/2021)