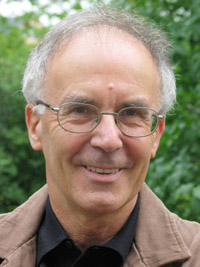 Tomaž Šalamun (1941–2014), a Slovenian born in Zagreb, Croatia, is considered one of the great postwar Central European poets. Among his books translated into English are The Blue Tower (Houghton Mifflin Harcourt, 2011), On the Tracks of Wild Game (Ugly Duckling Presse, 2012), and Soy Realidad (Dalkey Archive Press, 2014). Šalamun taught at the Universities of Texas, Alabama, Tennessee, Georgia, Massachusetts, Pittsburgh, and Richmond, and was invited to be member of the International Writing Program at the University of Iowa in 1971. He also spent several years as cultural attaché to the Slovenian Consulate in New York. He lived in Ljubljana, Slovenia.