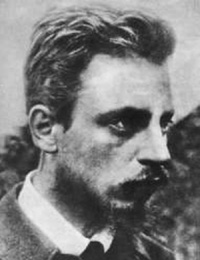 Rainer Maria Rilke (1875–1926), born to a German-speaking family in Prague, was a prolific poet, essayist, critic, and correspondent who rarely did anything but write. Well-known for his restlessness, he often became dissatisfied with his current “home,” sometimes only days after moving there with his custom-made standing desk. Among many other places, he lived in Paris, most notably in 1902–03 when he worked for Auguste Rodin. Inspired by the great sculptor, he began to look at objects with an artist’s eye, and developed a new lyrical style in his so-called Dinggedichte, “thing poems.” During the last years of his life he lived mostly in Muzot, Switzerland, where he wrote 400 poems in French. Rilke died of leukemia in December 1926. His collections include The Book of Images, New Poems, the Duino Elegies, and the Sonnets to Orpheus.