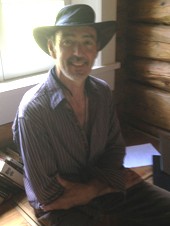 Martin Edmunds is the author of a prose chapbook, La Danza de las Zarzas (Dance of the Brambles; Frolic Press, 2015) and a chapbook of poems, Black Ops (Arrowsmith Press, forthcoming spring 2018). His writing has appeared in A Public Space, Little Star, The Paris Review, AGNI, The New Yorker, and elsewhere. He was awarded a 2012 artist fellowship from the Massachusetts Cultural Council, and three of his poems were honored in the W. B. Yeats Society of New York’s poetry competition in 2017. Poems of his were also chosen for Under 35: The New Generation of American Poets and the 1987 Avon Anthology. (updated 4/2018)

Edmunds’s book The High Road to Taos was reviewed in AGNI 42 by Don Share.