Even the East Indian gods know
a diamond weighs less than
a human soul, sometimes a stone cries out
when put on the turning table
to be cut and polished

the closest you will ever get to
a star, some say, to the cosmic
power of pushing back the
ocean, a sheet of white paper, a small
digital scale, a clear glass plate,

stones so dense they slow the
speed of light by one-third, these
blood diamonds leaving behind
fields of human bones in
the Arctic, Botswana, Angola,

these carrot-shaped kimberlite
tunnels, these pipelines of
diamonds, rough diamonds,
hard diamonds, round brilliants,
this carbon under titanic pressure

drawing heat from the fingers of
a hundred thousand imported
workers, oh, these mystical stones, these
table-cut diamonds, this eruption
of love and emotion from

when the Earth was still young,
this handshake and good luck, shifting
sands of ancient wealth, this price-
fixing, closest you might ever get
to the stars, some say,

mystical clarity from the Kalahari
Desert, from floating mines in the
South Atlantic, these chips of rock
that buy guns, pay bribes, this enormous
heat small enough to pick up with
a pair of tweezers

you can see the garimpeiros’ lives
inside these diamonds, their small lives
stuck inside, these diggers, don’t
touch the ground, it’s forbidden,
these ships sucking 90 metric tons of ocean

floor, calculators flying to and fro in
Paris, in Tel Aviv silence, these necks
and fingers, this Beluga, this best of
the best, this woman’s best friend
this violence, these women adorned with 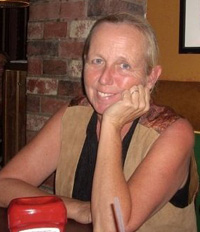 Liza Porter received the 2009 Mary Ann Campau Memorial Poetry Fellowship from the University of Arizona Poetry Center. Her poetry and essays have been published in numerous literary magazines, as well as in What Wildness Is This: Women Write About the Southwest (University of Texas Press, 2007) and Poets on Prozac: Mental Illness, Treatment and the Creative Process (Johns Hopkins University Press, 2008). Her personal essay “In Plainview” (Cimarron Review) was listed as a Notable Essay in Best American Essays 2006. (updated 8/2012)