She is going in for the Ukrainian woman to loosen the too-tight seams. In the room full of dresses with the long wall mirrors she wears her champagne dress, the tulle and lace and sequins around her white white ivory white. They stare at her bulging in her tight-stitched taffeta, champagne not necessarily a color for virgins. She told her friends and mother and aunts that she was too tan to wear white, and not that she and Jonathan had had sex once they were engaged, not that she couldn’t see her bottom ribs anymore. It was true she hadn’t known she was pregnant back in July when she bought the dress. But she had known even then she couldn’t wear white, couldn’t tell her mother, couldn’t shame the eyes of Christ frescoed in the basilica dome, just needed the Ukrainian woman to make room, loosen the seams with a small sleek ripper.

In the mirror the Ukrainian woman opens a drawer, fiddles, fishes out a silver seam ripper. She angles its single-tooth mouth along the puckering ravines of the too-tight seams. The seam ripper rips with quick pricks, women’s work, as she opens and teases the dress. The Ukrainian woman says she will open the seams, spread them, re-stitch and re-stitch, make her so beautiful people will forget that she’s not wearing white. The woman laughs because she knows her mother will never look her in the eye, laughs because Jonathan, if he knew what she was thinking, might not love her anymore. The Ukrainian woman says the seams are virgin seams, tight and unbroken, no one has ever unstitched this dress, maybe its previous brides were virgins.

The Ukrainian laughs because she knows that’s not true—in orthodox churches only white is for virgins. The seams are old and she struggles to prick them without scratching the woman’s belly skin with the ripper. But the woman in the dress doesn’t care anymore.  In the mirror she sees the dress destroyed, imagines her bridal night just a night, wishes the Ukrainian would let the seam ripper eat deeper into the seams. Down into her bones, down where she’s white. Her womb and cord and sac and mucus, layers and tatters, her child, in red, a body dress.

She laughs because Jonathan said this would be better, going to the altar with one shame instead of two, having the child so she can wear the secondhand champagne dress. She laughs because the mirror blares that she is not a virgin. She laughs until she cries because she’s a fallen bride of Christ, dressed in yellow, champagne, sick semen, not white. In the mirror she tells the Ukrainian woman to stitch the dress tighter than before, to drop her scissors and pins and tape, to drop the silver seam ripper. In the mirror she is walking down the aisle and her hips and stomach ruin the seams. Between the pews her stomach skin stretches and crowns through the taffeta, body rips the canal between the pews, arrives at the altar with some tulle in her hair, naked, strips of fabric undone at her feet so everyone can see, so her mother can see, so she has no secrets anymore.

The light above the woman in the gown is white. There are no drawers of seam rippers, no tulle and lace anymore. She left the Ukrainian’s shop because she cried, because some children aren’t blessings, because the Ukrainian wouldn’t rip her. The nurses told the woman that she could undress. She disrobed shy, like a virgin. The stainless steel cabinets reflect her face like mirrors, there are scissors on the counter, black stitches for making skin into seams. In the white room, the doctors wear open-back dress gowns. They assure her she won’t get bigger anymore, tell her she’s so tight even her husband couldn’t tell she’s not a virgin. They push the carts with the suckers and rippers away and the woman looks down, knows that Jonathan won’t love her now, her mother won’t love her, her stomach still stretched with its white-fat mother seams, but maybe Christ could be convinced that she’d done it out of love, love of walking into his church, a true bride. 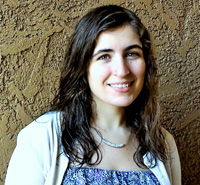 Kathryn Hill is an MFA candidate in fiction at Arizona State University, where she also teaches and reads prose for Hayden’s Ferry Review. Her flash fiction has appeared or is forthcoming at Fiction Southeast, Gigantic Sequins, Passages North, and elsewhere. Follow her on Twitter at @kathelizhill. (updated 5/2016)