You read how in sieged cities hungry people gnaw wood, boil leather, hallucinate. So it makes sense when your children’s emptiness makes you crazed, unsteady, makes you line the inside of your shirt with whatever fits, flat things are best: kool-aid packets, boiled ham warm against your skin, tortillas in the breast pocket of the coat you are wearing despite the heat, but this is how you learned to do it when it was still winter, when you first had the idea, when they were crying all the time with the watered-down oatmeal you were making stretch until you got your stamps, and you thought why don’t I just take it? But now it’s July, and everyone is staring and a package of ramen leaks out the bottom hem and the cashier gives you that look like goddammit-I-don’t get-paid-enough-for-this. And then you are in the back room with the cameras that watch everybody, when the manager says he is going to call the police or else maybe there is some way you can make it up to him, tells you to take off your top so he can see what else you have and the American-cheese slices and squeeze bottle of jelly spill forth from your bra and the cold plastic packaging leaves red impressions on your skin, which you try to focus on while he is taking his “cut,” his words, and you left them both of them in front of the TV and you’ve got to get back and the milk, could he throw that in too? If there is anything else you can do to help him with his “cut,” because using this code is doing something exciting for him like a wig might for another man. You keep counting up the thin, dense food, now strewn about his desk. You are making calculations: how much more could you get and what is the calorie-per-minute ratio and will it be enough? It’s never enough. But it will work for now and with the stamps you will try to get the filling stuff, cheap, lots of it, white bread like pillow stuffing, boxed macaroni, snack cakes, the stuff that really works and you will fill them to bursting, watch the luster come back, feel the pride knowing you did your job, and it’s a trade-off, yes, but everyone works to eat. And it’s worth it because when they’re hungry, they’re different. You’ve seen it sometimes, they turn on each other when they think one has had more, like your childhood chameleons, how one ate the other while you were gone, and afterward just sat sunning on its rock like nothing happened. So you try all the stores, and sometimes get caught on purpose if you’re onto the boss being a man, and you know the trick is when he asks what else you’ve got, you give him a little show, and usually they go for it, and if they don’t, they at least never call the cops and they give you whatever you’ve soiled with the warmth of your body. 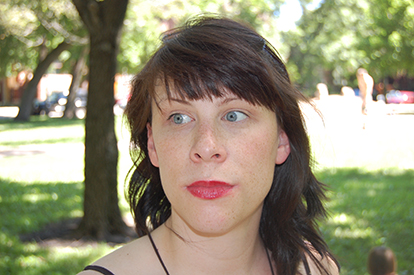 Erika Eckart is the author of The Tyranny of Heirlooms (Sundress Publications, 2018), a chapbook of interconnected prose poems. Her writing has appeared in Double Room, Ghost Ocean, Quarter After Eight, Quick Fiction, Nano Fiction, Quiditty, and elsewhere. She is a high school English teacher in Oak Park, Illinois. (updated 4/2021)