He gets as far as the subway station in front of the American Apparel a block from his building before realizing there is no world beyond his mother to run to. She circumscribes him, she is the absolute edge, the most distant star in the universe, though she is not very far at all from him. He cannot imagine a world without her—though only an hour ago his mother had turned her tired eyes toward him, and he recognized, in their weariness, that it was he who had tired her to complete exasperation, such that she could not prevent herself from saying to him, with only her eyes, that she truly wishes, sometimes, this time, that he had never existed.

True, he had intended to provoke her, saying “no, no, no!” when she had only asked him to put his plate in the sink. He had hit the plate, swiped it with his whole arm, sending it careening to the floor, where it shattered, splattering flecks of stew everywhere. “No, you clean it up!” he’d yelled, knowing, in his little heart, he had no reason to act this way, knowing he would hurt her, which is one of the first things a child must learn to do.

It was, of course, a test that she could not help but fail. Her response, her withering gaze, was reasonable—even he knew that. And yet, what is love if it cannot withstand a little flash of desperate hatred? What is hatred if not an acknowledgment of the fear of needing someone so desperately? Even he understands all of this as a bear cub understands its mother is the sum of nature.

And yet she had failed him on this night, as she had failed him before, failed his many pitiful tests. And so he would show her, finally, he would leave for good. For what is love if not an invitation to grieve? She had acquiesced to this grief, this sorrow of love, when she grew him within her and let him slide out. Even he knew this, though he did not, does not, yet know the word “acquiesce” nor understand grief as distinct from his other feelings of frustration, hunger, and elation.

But he would show her, he had to. He would make her suffer as poignantly as she had made him suffer the awareness that he is not at every moment treasured, at every instant a gift. For how can he live with awareness like that—if the most distant edge, the horizon, of the universe can do without him, and if he is the center of the universe, then nothing is safe, nothing can assuredly exist from one moment to the next, nothing will keep the universe from expanding until it dissipates.

And so he left quietly, having stuffed his lovey and favorite T-shirt into his Wolverine pack. He pushed the elevator button as he had demanded she let him do so many times before and walked right out of the lobby. He had walked down the block, determined.

He had even awaited the walk signal and crossed the street by himself. But at the subway entrance he had stopped, his tether at its limit.

Now he walks into the American Apparel. No one notices. He secrets himself into the middle of one of the circular racks ringed with jackets on sale. He stands nestled in the center, safe for now in the exquisite privacy of a place just his size, a little manageable bubble of world. He is waiting here. Someone will find him soon. She will find him. She will have to. 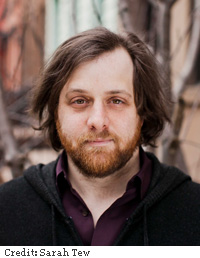 Craig Morgan Teicher is the author of four books, including _Cradle Book: Stories and Fables _(BOA Editions, 2010) and the forthcoming collection of poetry The Trembling Answers (BOA, 2017). He is also the editor of _Once and For All: The Best of Delmore Schwartz _(New Directions, 2016). (updated 8/2016)