Donny Lotkis is in trouble.

He has severed too many rabbit heads. He has skinned too many squirrels. Now—in his Goodwill pants and Pink Floyd shirt—he sits in Dr. Tate’s office, feeling as out of place as a mushroom in a flower bed. Donny’s mother is there. She is a large woman, who usually needs two airplane tickets. Her sides fold over the patient chair like dough overproved.

“Donny has a darkness,” Mother says. “First, the baby doll.” Thick raindrops of sweat have beaded on her brow. “Lordy—his sister just cried and cried. That doll head was inside my fridge. Her stuffing was behind the TV.”

“And at what age did this behavior begin?” asks Dr. Tate.

She is thin and Asian and wears rose-pink glasses. She does not wear a doctor’s coat, and Donny thinks this is odd: she’s a pretend-doctor. And her office is all gray, with exactly two mountain paintings and a cat poster in horrifying yellow, that says: BELIEVE!!!

Mother sighs. “He was seven.”

Here’s what you should know about Donny:

He is twelve and five foot two. His hair is a thick black mop, though last June he frosted his tips. He had a girlfriend once—Charlotte Thibbodeau. They were a mutual ten. He gave her a ring pop (pre-licked, but still) before Field Day. He played Q in the Q-and-U wedding in grammar class. He knows the secret about the Illuminati, the “Family,” the Moon-landing hoax. He reads only anime, wears only thrift—he likes the smell of someone else’s clothes, likes wondering, “Who did what in these jeans?” He’s found strange things in strangers’ pockets. Balloons, souvenir pennies, a “Dubya ’04” button. He’s that kid who writes notes in bathroom stalls like, “I C U” or “you look like ur mom.” He is very precise, Donny Lotkis. It is always left sock, right sock, left pant leg, right. He likes to leave “surprises” in his mother’s pink frilly toilet. He often has the urge to steal a child’s ball and throw it in the street, just to see what the toddler will do.

His real name is Donald, though he hates this. The nicknames, you know. Donald Duck. Donald Fuck. Donald Dump. Don-Don. The only nickname he allows is from his best friend Stan the Man, who calls him Donny Q.

This whole time, Donny has said nothing. He’s a thinking type—a quiet.

“Donny.” Dr. Tate is watching him with her bug eyes, wide behind the glass. “Can you tell me why you go after animals?”

She says “go after.” Like this is a game, a chase. Like, he’s the predator. Ha! He shakes his head, says nothing. The animals come to him. All it takes, he knows, is a birdhouse on the garage floor. Some peanut butter and birdseed, a well-timed net.

But he does know.

This is what Donny Lotkis will not tell his mother or Dr. Tate, who makes notes on her clipboard as if she knows him: there is a distinct line between what he does and what he doesn’t. Donny’s mother has used the word “sociopath,” but that’s a bunch of bull. He’s merely an observer, like a scientist—yes. Collecting pelts is one thing: he has plans for a coonskin cap. But touching baby birds or plucking wings off flower-dusted monarchs? No siree bob. He is a boy with lists. He is saving for a hunting knife. He has a running note with “qu” words—he is always Scrabble prepared. Quack queeny quill! Quartzite qualified quagmire!

Outside Dr. Tate’s window, spires of a palm tree lurch like needles against the sky.

“What we can do is prescribe a medication,” Dr. Tate says, and hands a tiny slip to Mother.

This is when Donny jumps. Feet to the floor—he is Donny Quick.

Dr. Tate flinches and he loves this, the flinch: like the shiver of a squirrel tail. She puts her pen to her mouth, sits up a little straighter.

Have these jeans ever scared a psychiatrist? Have they ever escaped an office, through an open portico and down stairs inlaid with Spanish tile? Have they ever bound through a quad, a parking lot—toward the Florida tree line, a perfect row of palms from a palm tree farm where newts and lizards slither by grass blades, where squirrels squirm up trees and sandhill cranes shriek into the air. They all scatter. They run. Yes, they run—but Donny has a quickness. He is lithe in his Goodwill jeans—he wriggles through the hedge and he hears the warble of his mother in worried octaves, but his gaze is on the tips of trees, his anger is up there beyond the fronds, where the sky is a delirious blue, the clouds as acrylic and hand-tipped as in a mountain painting. 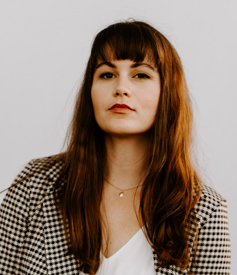