Mom is picking up the withered petals around my sister’s picture, on top of the chest of drawers, when someone knocks at the door. Wordlessly, she gestures for me to see who it is. Her hair is so dirty it remains perfectly still even when she turns her head. Her face is wet, and her blue eyes look like the bottom of a cracked glass bottle.

Mr. Santi’s receding hairline is magnified through the peephole. We exchange the ritual niceties, and then he gives me the envelope clutched in his trembling hand.

When I get back to the living room, Mom is still firmly planted in front of the picture, staring at the ceiling. The light from the table lamp makes her greasy hair and the tears collecting at the moles by the corners of her mouth glisten. She seems to be covered in seaweed and barnacles, like a creature just emerged from the depths of the ocean after miles without drawing breath. Her reserves of tears are exhausted.

“Who was it?” she asks, drying her face with a handkerchief.

I hand her the envelope with the homeowner’s association expenses.

I follow her into the kitchen. There’s a shopping bag of clean clothes on the table. Mom puts the lid on a container of meatballs and sauce, then wraps the covered container in clear plastic.

She opens the cupboard under the sink and reaches in for another shopping bag that she has carefully folded into a triangle. She unfolds it and puts the meatball and pasta containers inside.

“One more thing,” she says, while tying the handles. She leaves the kitchen and returns with a nail clipper. “Give him this too.”

“But doesn’t he already have one?”

I put the clipper in my pocket and point to the clothes. “You always give me clean clothes, but he always wears the same dirty ones.”

“If he doesn’t want them, bring them back,” she says. “They steal them from him.”

Mom turns away. She removes the wooden spoon from the edge of the pot and places it in the sink but says nothing. I gather the bag handles into my right hand.

With a hunk of bread, she cleans the remaining sauce from the pot and brings it to my mouth.

She gets ten euros from under the fruit basket and slips them into my pocket with the nail clipper. “Give these to him too,” she says. “I don’t want him to start smoking the cigarette butts he finds lying around.”

“Delicious,” I say, my mouth still full. “This sauce is delicious!”

“Now go,” Mom says, stroking me on the cheek. “And come right back.” She kisses me after opening the door. “Say hi to him. Tell him I’ll stop by soon.”

I walk toward the train station with my head low, under a sky I don’t care to look up at. I must have walked this street a million times. I know by heart the undulations of the cobbled sidewalk and the order in which the basalt blocks have broken away from the pavement, and I know the curses of the motorcyclists.

In the station’s waiting area I hear a burst of laughter and the tail end of a conversation. It seems maybe the people have it in for me, but when I raise my head I realize it’s not true. It’s two young African girls speaking in their own language, and I don’t think they know who I am.

Almost everyone here knows who I am. My sister spent a great part of her youth on the train platforms. She walked back and forth looking for someone to go with her into the old train carriage with broken windows on the ghost track.

The girl smiles. “Coming right up!”

On the stool behind the register sits Alfonso, the bar’s owner. He’s sixty-something, with thick eyeglasses and a moustache stained yellow by smoke. I hand him a twenty-euro bill from my wallet.

“And a pack of Lucky Strikes, please,” I say.

“How are we doing?” he asks, before spinning on his stool for the cigarettes.

The barmaid calls out, “Where do we stock the Morettis?”

“Down there,” he says, pointing to a section of the beverage cooler. He hands me my change and asks what goodies I have today.

The girl returns with the beers and Alfonso drops the pack of cigarettes in the same bag, making the bottles clink.

I return the smile and say goodbye.

Outside the bar, I ford the river of commuters waiting for their train home and wriggle out of the crowd just as the bell announces its arrival. At the end of Platform One, I leave the building behind and enter a grassy clearing. I walk under a row of pines, kicking the dry cones around and raising little clouds of needles. At the level where the train will stop, a soft breeze has started blowing. The sun is setting behind the carriage on the ghost track, and pale arrows of light pass through its broken windows to strike me.

Dad is in his usual spot, sitting on the ground with Mosul, next to the pole that marks the methane line.

Mosul greets me with a bedraggled smile. Mosul isn’t his real name. But it’s what everyone calls him because he’s a clandestine Iraqi refugee from Mosul. He’s a darkish young fellow, short-statured and introverted. His Italian is quite limited, composed of a few very basic words.

“He knows who I am. You introduce us every day.”

Dad laughs and elbows Mosul, leaning toward him. “Just wait until I introduce you to my daughter then!”

Dad’s voice has lost all trace of the blare it once had. Now when he speaks it sounds like he’s crumpling a piece of paper in his throat.

“I brought these just for you two,” I say, extending the bag with the beers.

Dad’s eyes quiver, and I don’t even know how. They’ve been empty, devoid of everything, since the day he stopped living.

He leverages his lighter to uncap the first bottle, which he offers to Mosul. Mosul thanks him by nodding his head and raising the beer. My old man uncaps the second bottle and proceeds to take long sips. He tilts his head back slowly, and beer dribbles into his beard and across his grimy clothes. The breeze carries a strong whiff of sweat.

Dad finishes his beer and eases himself onto the grass, leaning on the ivy that enshrouds the wall, his fingers crossed behind the nape of his neck. I set the bag with the meatballs and pasta beside his legs.

“Your dinner is in there,” I tell him.

Mosul looks at the crow scampering about and smiles.

I crouch down to give Dad a kiss. “I have clean clothes for you. Would you like them?”

“As soon as she arrives, we’re going back home.”

The bell rings at the train crossing. People and cars rush to pass before the gates fall.

“See you tomorrow,” I say to Mosul.

Dad’s gaze is fixed on the train tracks, at the point where they disappear beyond the bend. I put my hands in my pockets and head toward the exit, the bag of laundry swinging from my wrist. My fingers find the metal of the nail clipper and the paper of the ten-euro note, but I don’t want to turn back now. I know my sister will never return. There was a time when Dad knew that too.

Her name was Alessandra, and she was twenty-two years old when she resolved to depart with the 6:10 train one evening. They say they found her head at the foot of the incline, in a thicket of wildflowers. I hope it’s true. She loved those flowers so much. 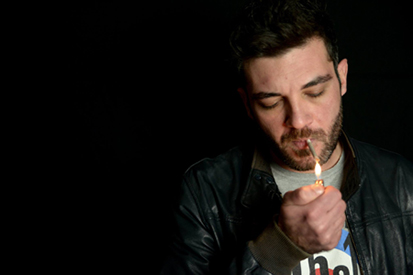 Ivan Ruccione’s stories have appeared in Italian literary magazines such as Nazione Indiana, Poetarum Silva, Altri Animali, and Cattedrale. “Departures” is part of his story collection Troppo tardi per tutto (Too Late for Everything; Augh Edizioni, 2019). He is a cook at a winery and lives in Vigevano, a historic town near Milan. (updated 4/2020) 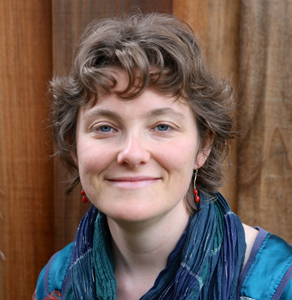