Simic’s poems . . . come to us from an enormous otherness, a distance beyond words, wrought out of remote elements of the imagination of hinterlands. . . . [S]o unheard-of are the images . . . that they seem, at first, not to have been made of language at all. . . . And so they are, though it has all been done with words, words spoken out of a silence, into a silence.

Karina Borowicz’s debut collection, The Bees Are Waiting, similarly belongs to a tradition of poetics that believes silence is as important as language—and because the poet inevitably mars silence, she had best compose concisely. With spare stanzas typically devoid of punctuation, Borowicz’s poems appear like ephemeral or momentary visions. Her settings are typically remote, unpopulated, and cold, and Borowicz’s imagination inclines toward empathetic renderings of people who inhabit these landscapes.

The book’s first poem, “New Bedford,” which is the name of a Massachusetts fishing port, sets a tone of hardship among the laboring class: “At dawn they carry warm loaves in net bags / still mourning husbands the sea never gave back / the black they wear like the coldest part of the water. // at dusk their bags hold fish / wrapped tightly in white paper / enough to feed their children . . . // enough to feed their children’s children / who speak the old round words / with flat tongues.” Despite the bleakness that characterizes the lives of these women, their commitment to work and family demonstrates their strength to persevere through tragedy and loss.

Another of the collection’s early poems, “The Noodle Maker’s Shop,” further illustrates Borowicz’s imagistic style and her reverence for the laboring class:

scoured by tiny grains
the small window
no longer transparent

The precision of detail (“tiny grains,” “dust of flour,” “bulb’s cold glow”) and the solitariness of the figure suggest a craftsmanship both austere and painstaking; the final stanza, however, presents an unsettling ambiguity. The image could be interpreted as a convict digging his way to freedom, or the Sisyphisian repetition of a futile task. The relationship between labor and hardship Borowicz illustrates in the poems above evolves into a central conflict in The Bees Are Waiting, between freedom and constraint.

Several poems take as their subjects rules and instructions, and how their speakers respond to them. “Last night, I went from room to room / and nudged all the clock hands ahead / an hour. It’s what we’re supposed to do,” Borowicz writes in “Daylight Savings Time,” “Yet to touch the moving parts of a clock / felt strange, like touching the face / of a wild animal.” The passive construction, “It’s what we’re supposed to do,” evokes Heidegger’s concept of Das Man (translated as the impersonal, generic pronoun “one”), an inauthentic existence of conforming questioningly to social norms or traditions, as in that is what one does. This blind adherence to custom causes the speaker’s momentary estrangement from her existence. Borowicz’s conclusion suggests the speaker’s recognition of the clock as mere representation of control, a man-made structure for ordering experience through time. Ultimately the speaker experiences a momentary vision: this stable or known construction becomes a superficial or arbitrary masking of a chaotic and primal force, as suggested by the “wild animal.”

Moments of existential estrangement pervade this collection, and Borowicz’s speakers seek to explore the uncertainties regarding the concept of a stable reality. In “All Hallows’ Eve,” the speaker and an unidentified partner are “searching for anything / that remains of holiness / something sudden and unexplainable,” and they “stand still / for a long time, listening to the scrawl / of tiny feet on dry leaves.” Interrupting the intensity of this moment, the speaker asks: “Why don’t human eyes / shine like deer eyes / or a fox’s when caught by the light”? Her companion’s response, “Because our eyes got used to looking / at fire, you say, and we were tamed,” suggests a provocative irony. According to Greek myth, Zeus feared that humans were becoming too powerful through Prometheus’s teachings, and commanded that fire be withheld from mankind. Prometheus defies Zeus’s command—yet in Borowicz’s poem, fire is not a symbol of empowerment; rather, the image of the fire coupled with the word “tamed,” suggests that humans have lost aspects of our primal, elemental selves, or that we have lost our capacity for astonishment.

In Borowicz’s world-view it seems as if we have fallen, not necessarily from the state of God’s grace, but from a state more satisfying and psychologically nourishing than the reality she depicts. The poem, “Cinema/Verity”—the title a play on “cinma vrit,” a hyper-realistic form of documentary filmmaking—captures Borowicz’s central question of this collection: to what extent can imagination influence or, to borrow a phrase from Wallace Stevens, “express an agreeable reality”? Written as a recollection of childhood, or perhaps young adulthood, the speaker of “Cinema/ Verity” recalls images from a film: “The people made of light / were beautiful, their skin / transparent their hair glossy black.” When the speaker emerges into the “cold daylight,” reality interposes:

the strangers passing
were not made of light but something else
wool and grease
no music would follow us
but the world had a weight I longed
to test in my hands
I pressed coins into the outstretched palm
of the woman at the newsstand . . .

I carried the paper like a bundle of silk

The words “wool” and “grease” connote a reality that is oppressive and un-enchanting, though the speaker persists in her power to transform her reality suggested by the simile in the final line. The phrase “test in my hands” strengthens the speaker’s resolve to pursue the belief that the individual imagination can invent an authentic, convincing reality—or to draw again upon Stevens’s philosophy—that the imagination can convince us “to believe in a fiction, which you know to be a fiction. . . . The exquisite truth is to know that it is a fiction and that you believe it willingly.”

For Borowicz this “exquisite truth,” or willing belief in a fiction, does not come easily. The phenomenal world continuously impinges upon the imagination, and glimpses beyond the world of appearances are brief or, in the case of her poem “The Message,” intimidating. After describing a woman alone in a snowstorm in the middle of a field, the speaker questions: “what if the snow all of a sudden / stopped, every stray flake / lifted like the hem of a veil”? The simile of the snow as a “hem of a veil” suggests the idea of a pure or true reality that is being masked or distorted, an interpretation that is further supported by Borowicz’s explicit allusion to Percy Bysshe Shelley’s sonnet that begins: “Lift not the painted veil which those who live / Call Life: though unreal shapes be pictured there, / And it but mimic all we would believe / With colours idly spread . . . ” Both Shelley and Borowicz explore the idea of a world beyond appearances, and while Shelley’s poem conclusively depicts the failure of a “Sprit that strove / for truth” to experience such a world, Borowicz’s poem ends with an unresolved tension. The speaker describes the “she” standing at a kitchen sink watching a “tiny globe of water hesitating/ at the edge of the tap,” and then questions, “would she hold out her hand/ would she receive it”? The drop of water is arguably an image of new growth, and “globe” a new world or new vision contained within this drop-but the poem ends without an answer, suggesting that the apprehension of the unknown counter-balances the zeal of its pursuit.

The final poem in The Bees Are Waiting continues to explore these two differing states, reality and its destabilization through a visionary, dream-like reverie; however, Borowicz offers a more resolved ending. “The Way Back” begins in tone and image like a Romantic lyric: “My dreams are shadows / my sleep the weight / of apple blossoms,” but in the second stanza reality, this time in the form of oppressive weather, interjects: “but the morning is already hot.” The unconscious, a state of peace in which the speaker can find reprieve from the “dusty roar of trucks mixed / with the buglike clicking of birds,” is fleeting. The natural world, a setting for spiritual invigoration, has been corrupted by, or even more tragically, has become indistinguishable from the noises of civilization and industry.

Though the poem’s penultimate stanza presents itself in simple, declarative lines: “even after all these / years of waking I don’t know / what is this world / how do I keep finding my way / back, always a different path,” a brief poetic analysis supports the reading of a positive ending. The awkward syntax of the second line simulates the speech of a child; the enjambed “back” emphasizes the speaker’s insecurity and momentary loss of direction. But the sentence continues, enjambed into the fourth stanza, a spare tercet suggesting a tonal and imagistic return to the lyrically Romantic opening stanza: “back, always a different path // through the blackness / the flickering pinpoints of memories / you my North Star.” The poem ends somewhat ambiguously, but reassuringly so. The speaker, suggested by “always,” continually regains the “you” that she desires. All of the interpretive possibilities of the ambiguous “you” suggest direct objects that stabilize, guide, and re-invigorate her existence: her beloved, her imagination, her poetry.

Readers who prize the economy and imagery of Anna Akhmatova’s early lyrics or the darkness and dream-like atmosphere of Georg Trakl will find much to love in the poetry of Karina Borowicz’s The Bees Are Waiting. This book makes us receptive to its illuminations of the mysteries of Being, to the hardship of our human plight—and conversely to the renewal Borowicz offers through the beauty, music, and empathy of her art. 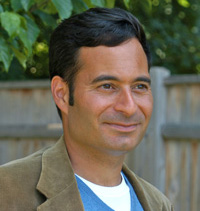 Jason Tandon is the author of four books of poetry, including The Actual World (Black Lawrence Press, 2019), Quality of Life (Black Lawrence, 2013), and Give Over the Heckler and Everyone Gets Hurt (Black Lawrence, 2009), winner of the 2006 St. Lawrence Book Award. His poems have appeared in Ploughshares, Prairie Schooner, Beloit Poetry Journal, Barrow Street, Esquire, and elsewhere. He is senior lecturer in the Arts & Sciences Writing Program at Boston University. (updated 8/2019)