With flea market antique tools
I constructed a bus stop shack
Along my rural route complete
With wooden benches so children would be
Weather-cozy waiting for their yellow dinosaur.
In my cupboard, flashlights pregnant
With fresh batteries, an emergency generator,
Candles as last resorts. Bad things do
Happen, happen to all of us, sometimes
Unforeseeably, by no fault of our own.
A young man whose car broke down
Knocked on my door. I offered him hot soup,
Use of my phone, wished him luck before
Ushering him on his complicated way.
Here, this jacket should fit.  It was
My son’s—but he’s outgrown it.
You never know how long the tow truck
Will make you wait.
While I looked in the closet, he stole my father’s
Pocketwatch, a heartless little five fingered
Discount. I wanted, really, to be responsible
For no one other than myself; often, even that’s
Too much. Pacing the sidelines of a playing
Field, cheering the outcome of one of my sons’
Competitions, I held my palm to the sky
And queried myself, is that rain?
I turned to a stranger and asked if he too felt
A drop and looked to the sky for possible lightning.
I remember after one snowstorm another son
Said, Hey Pops, I can’t find my gloves
But I don’t think they’re lost.
That spring, after the thaw, I discovered them:
Ten crippled fingers.
He must have taken them off for the intricate
Manipulations of his snow fort tunnel—
Some secret passageway known only to him.
Just yesterday I was mowing the autumn lawn,
Bagging the clippings, calm in a sort of meditative
State, a warmer than usual October afternoon,
The kind when you know you have hours
Of pleasant labor ahead, and even if you finish,
There’s still more to do, so you are resigned
To the unfinishable, are in no particular hurry,
Acknowledging the futility of thinking your work
Will ever be done or your life will continue
Indefinitely. I was dumping the leaves
On my property’s edge and saw a tall boy
Shooting hoops in our basket, and the basket,
Being adjustable, was lower than normal—
But I didn’t know that then, so the boy seemed
Even taller than he was, dunking, fantasizing,
Commentating to himself his own miraculous
Last second successes. Narrator of his own life,
He also doubled as the invisible man who controls
Time, who can stop the clock for another chance.
But something round falls short; it always does.
He will get plenty of opportunities
To sink a winning shot, or so he thinks.
This is the genetic delusion coded so masterfully:
Boys are always stealing time or wishing acceleration.
I didn’t recognize that boy for an instant—then
I did; he was my youngest son, now taller
Than his brothers, handsome, muscular,
And though my own father has been underground
35 years and I rarely think of him, I imagined him
Stopping in for a late afternoon cocktail, saying
Who’s that kid with the sweet jump shot?
Papa, that’s one of your grandsons—Ray.
And the others?  What are their names?
Let me see a photo of your wife; I’ve never met her.
The lack of something to say brings bubbling anger—
Think how the first child to exhaust his clever words
In a basketball argument is the one to throw the first punch. But it’s
Getting late; the other boys are well on their way, already men.
That last morning I saw you, Papa, you missed a belt loop.
I meant to tell you that. I figured I’d say something when you got home. 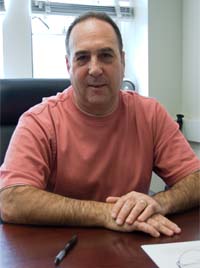