Always on edge, always desirous
Of becoming someone else, I see myself
At seventeen in a stripped-bare room

Poised at a window that breathes into my face
The damp spring chill of that raw afternoon:
My eyes meet the gaze of burned-out sockets

Of broken windows in a tenement
That lists like a ship about to capsize,
The bulldozed lot where the building leans a welter

Of tire tracks from tank-treaded machines
Lurching in diesel-drunk abandon.
No god of travelers extends his protection

To that runaway from home, a bearded boy
Looking tough, a bowie knife strapped against his thigh.
The vets I’d met hitching in last night’s downpour eye me

With a half-dazed, half-stoned suspicion,
As if I were a version of who they’d once been:
I want to ask what combat means, my admiration

For their camouflage and heavy black boots fueling
Their joking talk about Vietnam as if it were a party
Where people died, the smack so plentiful and pure

That it scared them more than being “smoked in a firefight—”
I want to ask, but their eyes
Warn me off, a quiet withholding privacy

That reminds me of the speed-freak who shot himself
At school beside the car-lot fence—what was he thinking
As he stood there, his finger tightening on the trigger?

Our principal, his mind four-square, told us
To concentrate harder on our schoolwork, his job, so he said,
“To make us toe the line for our own good . . .”

But where was the line that day for that boy?
He must have drawn and re-drawn it until it stretched
Taut as a tripwire….Or if John and Mike (am I remembering

Their names right? And wasn’t there another one, a guy
From their old unit whose crib it was—yes, he drowsed
In a car seat salvaged from the street, his drugged body

Heavy, twitching as he dreamed) if they’d been
At My Lai or some other thatched village
Now cinders growing up to jungle, how easily

Search and Destroy crossed the line—my mind glazed over
At what massacre might mean…even
The threshold which I thought was freedom, the doorsill

Of home, faded into miles of empty highway and the dogged weariness
Of sparechanging on streetcorners and sleeping in ditches
And roadside fields…I tried to envision what John and Mike

Had been through, sniper fire, shellings, tracers and flares
Showering through the dark—or had they suffered
Only boredom? Just back from sweating in barracks in Saigon, still unused

To cold, they huddled in their field-jackets as I
Stood at the pane, enthralled by the voluptuously lazy
And long slow-motion curve of the wrecking ball

That surged through the chill afternoon
Until boom!—mealy plaster powdered as walls
Buckled, haloes of dust swirled

Above rubble fuming. At last they joined me
At the window, and our eyes seized on
Snapped-off pipes, wires adangle, flaps of pink-fleshed wallpaper:

In a single afternoon what someone
Called home lay toppled on cracked foundations, a ruinous
Jumble of brick and mortar

That left me numb but exhilarated: All that remained
Standing was one spindly tree just putting forth
Buds and quivering in wind that whipped the faces

Of passersby who, edging forward for the kill,
Now dispersed down the street . . .
John and Mike roused me, calling, “Hey, little brother,

Roll us a joint.” Sensible of the honor,
I see myself nervous with the cigarette papers,
Then holding it out for their shrugging approval . . .

After we smoked, we floated in drifts
Of sun and shadow, suspended like souls
Poised alive on golden scales, no judgment

To awe or frighten us—if it wasn’t
Fearful or awful to huddle
In that chill room, night freezing to the pane . . .

Their friend slumped passed out in the car seat,
Their breathing low and heavy in the dark.
Hungry, exhausted, still a little stoned, I rose

To the window and blinked back the headlights
Of late-night taxis that seemed to steer themselves,
Their drivers invisible behind dark glass.

Night had filled in the vacant lot where the tenement
Once stood, as if a second city
Waited to be built of shadows and streetlight, the dim furnace-glare

Of office towers, of moonglow molten on the skyline
—Even as I crashed, my euphoria
Whispered, This is it, this moment—until

With stoned abandon my thoughts drifted
To fresh-laundered towels, a wide soft bed, sheets
Tucked in tight (“military corners” my mother called it). 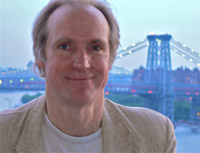