all that’s necessary for protecting
the abandoned warehouse from the likes of
spray paint that brands the bricks anyway.
We’d set our eyes on the wall of white blood

meant probably to hide a tag
other than SERVER, who appeared
to have rappelled from the roof, or hung
bat-wise, shaking cans into hysterics.

Get this: the word canvas comes from the French
canevas & from the Greek _cannabis
_ meaning hemp, which is to say Mary Jane
was made for artists & activists,

as opposed to the bigots who published
“Get Out the Hemp” as a scare tactic.
We didn’t want to erase such a rich,
complex history, but to fashion

a mural that could serve as a gateway
into the land my comrade’s ancestors settled
both before & after the Trail of Tears,
& to make art that showcased the level

Greenwood reached before Greenwood was reached
by fire. We took the number from the sign
that read Empire, & set out to sketch
what would become our concerted design,

but when we finally called, the owner
said, I don’t like tattoos, so why would I want
graffiti on my building? & hung up.
We knew that he knew his decrepit haunt

was already laced with graffiti,
& thought he probably had plans to sell
to developers eager to benefit
from Greenwood’s imminent centennial.

Still, it was a blow. Not because of the inked
skin of my comrade, or what was due
to be torn down. But because the building
stood for old thinking, too stubborn to die. 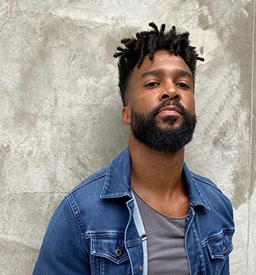 Clemonce Heard is the author of the poetry collection Tragic City (Anhinga Press, 2021), which won the 2020 Anhinga-Robert Dana Poetry Prize, selected by Major Jackson, and investigates the events of the 1921 Tulsa Race Massacre. Heard’s work has appeared or is forthcoming in The Missouri Review, Cimarron Review, AGNI, Iron Horse, World Literature Today, Poetry, Rattle, and elsewhere. Heard received a 2018–19 Tulsa Artist Fellowship and was the 2019–20 Ronald Wallace Poetry Fellow at the University of Wisconsin-Madison. (updated 5/2022)