We made our pit stop about half a mile
From the demesne gates, pissing like men
Together and apart against the wall.

“A large, undangerous drinker,” he called Larkin,
But not undangerous he. His forthright stroan
Went glittering like a foil, Marlovian,

As shoulder to shoulder, before we got back in
He intimated he’d probably not be
Returning to Caroline. The headlights shone

Stiffly into a whipped-up swirl and eddy
Of roadside leaves—“like ghosts from an enchanter
Fleeing!” O irremediably

Literary, first-striking Cal, at your
Memorial service later on that autumn
I said the cabbie who’d ferried you to the door

And waited to be paid already had been
Paid in the coin of language, that East River was Styx
And so on, rising to the occasion

Perhaps too highly. Mary MacCarthy’s verdict —
As reported back to me, at any rate —
Took my rhetoric and wrung its neck:

“The biggest cover-up since Watergate.” 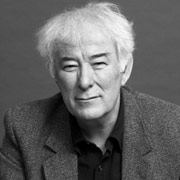 Seamus Heaney (1939–2013) wrote some of the most revered poems of his time and published them in twelve collections, from 1966’s Death of a Naturalist to 2010’s Human Chain. He received the Nobel Prize for Literature in 1995. A former Boylston Professor of Rhetoric and Oratory at Harvard University, he lived in Dublin, Ireland, until his death in August 2013. His association with AGNI spanned three decades.

Heaney’s book of prose essays The Government of Tongue: The 1986 T. S. Eliot Memorial Essays was reviewed in AGNI 31/32 by Eamon Grennan.

Order AGNI’s limited-edition broadside of “Saw Music,” first published in AGNI 61 as part of the triptych “Out of This World” and later reprinted in his acclaimed collection District and Circle.