Each Friday night in the ice-show
she got those families to know
she was the stunner on the bill.

But they were weird. You’d never hear
their chatter pick apart her skill.
It was a skill that touched on fear.

Was like the way everyone knew
the whistle at the reactor blew
each Thursday at 3:00. But if they heard

it any other time, the blast
meant a disaster had occurred.
They’d need to find their families fast.

In her over-the-top rock song
construction workers toiled headlong
through the night to build the highways.

Then, bit by mechanical bit,
it all fell to industrial maze.
But in the silver suit that fit

like a skin on her body’s curves,
during her leaps and agile swerves
across the rink, she made the ice

the base for an action all her own.
Watching her lunging, circling slice
turn to the center for a lone

twirl, so fast she was just a ring
of swivelled silver, human spring
of molten silver, you could feel

she’d cut the story from the song.
No one would guess where the real
story had gone. Unless in the throng

heading out to the parking lot
you were a sniffling girl. You thought
about the show. In the silence

you turned to stare from the back seat.
White ranch house, slag heap, chainlink fence
then aspen spooled above the street.

They seemed a film between the sky
and your reflected, webbed eye.
With a nauseous urgency

you guessed this was the time to settle
your future. You thought “I want to be
the woman who turns to liquid metal.” 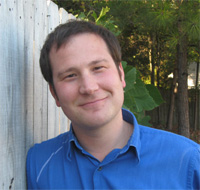 Peter Campion is the author of three books of poetry, Other People (2005) and The Lions (2009), and El Dorado (2013), all from University of Chicago Press. He was the 2010 Joseph Brodsky Rome Prize Fellow in Literature at the American Academy in Rome, and he was also a 2011–12 Guggenheim Fellow. He directs the MFA program at the University of Minnesota. (updated 4/2016)

Campion’s Other People was reviewed in AGNI Online by Robert Pinsky.