Who would want to die defending Firestone Tire
and its brick storage yards?
That night, at a plant torched by two laid-off steamfitters,
crawling the maze of a shipping dock, dazed, choking
on the floor with an empty oxygen tank,
my father would be discovered by another firefighter,
who would half-lead, half-drag him
by his collar to the outside.
No, my father didn’t want to die there,
not even if every seed, each grain of sand, is numbered.
Just as ten years later nothing could explain it to him—
just why the man who’d saved him lay comatose
in a semi-private hospital room,
cancer re-sculpting every cell in his liver.
For weeks my father went around
wearing a miserable, distracted look,
as though carrying on constant arguments with fate,
as if it were some sentient lump or a postulating, querulous
wind loud as the Machine Age
furnace squatting at home in the basement corner.
At night, when its oil burners kicked-on,
a glow filtered out the access hatch,
heavy glass the size of a dollar bill;
deep orange, flickering slightly, suffused.
Floorboards and air would hum. A base rumble that,
to my father, may have seemed filled with every loss
put in this world, to deny us, to crush.
The hell with that. He smashed a beer bottle
against the cellar wall. No cry for help.
The hell with that. Nine years old, the only thing I’d heard
when my father, back from Firestone, pushed into our house,
was the groan of the couch. Smoke and creosote,
stink of burning rubber. Soot
blackened his hair, soot eyebrows, soot forehead.
I’d stayed awake, listening as he nodded off and snored,
somehow imagining ashes
got sucked into his lungs, or deeper.
How deep could it go? 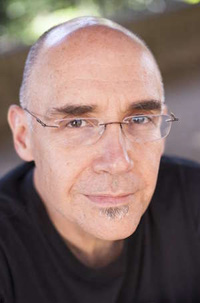 David Rivard is the author of Otherwise, Elsewhere (Graywolf Press, 2011); Sugartown (Graywolf, 2006); Bewitched Playground (Graywolf, 2000); Wise Poison (Graywolf, 1996), winner of the James Laughlin Prize from the Academy of American Poets and a finalist for the Los Angeles Times Book Award; and Torque (University of Pittsburgh Press, 1988), winner of the Agnes Lynch Starrett Prize. Graywolf released his new book, Standoff, in August 2016. His poems and essays have appeared in American Poetry Review, AGNI, TriQuarterly, Ploughshares, and other magazines. Among his awards are fellowships from the Guggenheim Foundation, Civitella Ranieri, the National Endowment for the Arts, the 2006 O. B. Hardison Jr. Poetry Prize from the Folger Shakespeare Library, the Massachusetts Arts Foundation, and the Fine Arts Work Center in Provincetown, as well as two Pushcart Prizes. A former poetry editor at Harvard Review, he directs the University of New Hampshire MFA in Writing Program and lives in Cambridge. (updated 10/2016)