The cloak he wears is made of books,
the threads of which tie his friends
to him, bring us out this cold night
to celebrate the season, the onus
on none of us, anonymously
clad in late boho Marxist chic
with added attic grace so simple
it goes unnoticed until one of us
looks away from the mirror,
spills tonic on the black dog
who wags his tail and goes
in search of wild turkey
he chased in his dreams last night,
and tonight we chase with beer. 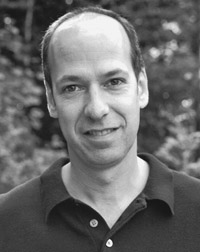