Once there was rage and the promise
that rage was a god not a corpse
message nor a melting of the core.
Once it moved us closer to weather
and thunder and it made poetry
as a cure.  Then Herodotus broke
my heart with his history: his rumor
that begins as living twice and ends
as recompense for loss.  Events bent me.
I took the arrow of accuracy in my eye.
The sugary accounts made me votary,
the biographical acids lashed my back.
I gave up songs for facts: those green
squawking parrots, that fire truck,
that earring, that body bound and gagged.
Then America broke my other heart
with its jails and gerrymandering,
its Emmett Till, its charms
and concussions, its ringing in my ears.
Who’s the president?  Who’s your mother?
Who painted the angels?  Who bombed
Homs? Repeat after me: comorbid,
torpid, transported.  Close one eye.  Hum.
Where’s your mother’s nation?  Your father’s
sky?  Who’s your other?  Close the other eye. 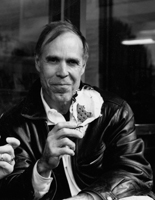 Bruce Smith was born and raised in Philadelphia, Pennsylvania. He is the author of six books of poems: The Common Wages; Silver and Information (National Poetry Series, selected by Hayden Carruth); Mercy Seat; The Other Lover (University of Chicago), which was a finalist for both the National Book Award and the Pulitzer Prize; Songs for Two Voices (Chicago, 2005); and most recently, Devotions, a finalist for the National Book Award, the National Book Critics Circle Award, and the Los Angeles Times Book Award, and winner of the William Carlos Williams Prize. He teaches at Syracuse University. (updated 10/2021)

Smith’s book The Mercy Seat was reviewed in AGNI 42 by Don Share.