16 and 17 and hardly knew his name, and can’t
make out a single word he’s saying, and I can but nod and tell
them it has become a trademark and a tragical one at that;
lyrics pure poetry, Norton Anthology, and we

can’t understand any of it, so the thing to do is to cease
to prick up your ears and relax. And so there we sit slumbering along
and I doze off into the rest of a rare evening off with the boys,
far away from the television set and the narrator’s voice

in Desperate Housewives or Grey’s Anatomy, my own
answers and pedantry pretty much gone (the blind do tire of trying
to hit the egg) and in the background this yelp, like a different tongue
but not entirely as I recognize shards of it but not quite

like in a dream, like in said the joker to the thief
and then is when I wake up, wide-eyed, and sharp, all ears, like a dog
on the watch, and find myself on the edge of my seat and hear
somebody shout come on, man, come on,

we love you, and the whole thing has begun
to move like some overloaded cart being pulled out of the mud
and there’s this great effort, steam, a pumping and pounding
like of a horse’s heart and lungs, and hooves

stamping, digging into the heavy ground
for leverage, into the earth and chest, and so he has, come on,
stressing syllables that hover in the darkness overhead, this tiny figure,
a thin man, standing there, moving around

mysteriously, like a ghost or God’s own little finger
and I get up and they sit there smiling at me as I leap off my chair
and go bouncing down the aisle like a dog, like a boy, yes, like a
rolling stone, and wrestle my way through the crowd

for by now everyone is standing up to see him,
to see his face, to see it with our own eyes, that it is him,
and I have joined the pack, dogs all, excited, domesticated and after it,
freedom, as if it were a welsh red fox

there on the stage curiously covered in Autumn
and mist, the grass growing uphill and in the distance the edge
of the woods, the fence at Laugharne and the scent of the bay,
the followers’ return, beagles, horses and men

on a blanket of green patches and lichen-badged
clawdd, a hazel bush, a spot of deepest red of late wild fuchsia,
ferns, rust, castan-wydden burrs bursting on beds of this year’s leaves,
humus and moss, and the fox on the hill barking clear

and cold: there must be some way out of here,
a direction home, answers to be found somewhere downwind
and a howling for the lot of us, a name, not even his, but his to choose,
like a father, a trail, for the long haul to the hole, a winter coat

for desire, shelter from the storm, and after the passing away
of the king, here the man, in this improbable gold-lined mexican suit
and boots of spanish leather, I may hope, and surely it’s a guise, and I see
his pale visage, the slits and shades, the slyness in these

vaguest features, the gestalt over the organ of a complete
unknown as he looks up from under his hat with a geste and goes on
and prepares to bow and retreat through the smoot and run
and grins and sounds even better than Dylan himself. 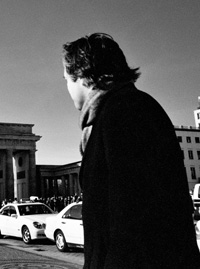 Johan Huybrechts’s poems have appeared in Beloit Poetry Journal, Ambit, Magma, AGNI, The Moth, Lighthouse, and Salamander. One was runner-up in the 2017 Ambit Poetry Competition, judged by George Szirtes. Huybrechts works as a medical doctor and lives near Ghent, Belgium. (updated 4/2021)