The simple-hearted and the sincere never do more than half-deceive themselves.
—Joseph Joubert, Pensées

Eventually, of course—no surprise here, the world being what it is—I met the other Gary Amdahl. He looked exactly like me, according to our families anyway; we were unwilling to accept the shortness of our legs and how bowed they were—you could have driven a truck between his—the immensity of our foreheads, the tinyness of our eyes, or the featureless tomatoes we became when we blushed, which was often and easily. I said I would grow a beard, which made him shudder with distaste, and he offered to try contact lenses, which you couldn’t pay me to wear. The differences in our personalities, however, were appalling. It’s not too strong a word. I am not a believer in the infallibility of first impressions, but I do know what it’s like to meet someone you almost instantaneously dislike. We all do. It’s instinctive. These people alarm us. Well, the other Gary Amdahl alarmed me. My instinct was to nod and smile and move on. He set my teeth on edge. He evidently had a bad temper, would raise his voice or give menacing looks in public, and had a terrible gift for sarcasm, which he would use with full commedia dell’arte gestures as if a mechanism connecting his mouth and arms had been engaged. If people were being witty, he became desperate to top everything off with a devastating satire of the entire mise-en-scène. He laughed too much, explosively, nervously, preemptively, and at his own jokes. He was extremely, pathologically sensitive to criticism, very defensive, and even though he had lots of money, he always let other people pay. He tailgated at a hundred miles an hour, simultaneously laying on the horn and flipping the bird, hated crowds, was very impatient in lines, and had the table manners of a starving dog. It was repulsive, almost sad, to watch him eat. Finally, he had a way with women that I thought was transparently disingenuous but which seemed to work very well for him. He was married, his wife was beautiful, and she appeared to suffer him gladly, but I saw her once, much later, swing a big heavy sack of potato peelings at him and hit him smack in the side of the neck—almost knocked him off his feet, and you could tell he was seeing stars. On the plus side, he had a fine singing voice, was a real guitar slinger, and had a great job (Amdahl Corp.), with the kind of responsibility and authority that not just any asshole can get, or hold onto, for very long. He loved his dogs and cats and was very gentle and sweet with them.

As for his observations and analyses of my character…! He said, “I’ll make this brief. You are a misanthropic artist manqué_._ You are lazy and cowardly. You make a big show of being a lone wolf, with only your principles and vision for company, but I have never met anyone more thoroughly dependent on the goodness of other people. You have sacrificed everything that makes life worth living: hearth, home, the love of a good woman, the hopes of your family, the esteem of your fellows…self-esteem. You want to canonize Chekhov, but he would never have gone in for your kind of self-deceit.”

“Say what you like,” I said serenely. “But I am a maker. I am a creator. I am probably, though I can’t prove it, responsible for your existence. Everything you think you know about me, you know because I want you to know. Require you to know, so as to employ you in my creations.”

One of us laughed. I think it was him, given his predisposition to it.

“You didn’t create me, you fucking dimwit.”

“How do you know that I did not create you?”

“Fine. You created me. If that’s your story—stick to it, buddy.”

“Given for the sake of argument that I’m right—what does that make you?”

It was a ridiculous question, and I knew it. I was angry and wanted to humiliate him. We went back and forth for a while trying to come to an understanding of what sort of answer I was looking for. He paused and appeared to be giving serious, even troubled, thought to it. “If you made me, what does that make me?” he asked sincerely.

He took pity and exacted his revenge at the same time. “The lesser evil,” he said, “just for starters.”

And I say yes, yes, yes, easy for him to say, but where is he now? Better still: where am I? No, no, Samuel Beckett said it best when, on hearing voices in or near his head, he demanded to know who was speaking and who was listening. And refused to go on until he got it sorted out. Certainly there can be another man in the world named Gary Amdahl who looks a lot like me. Just as I can imagine, I can create, a Gary Amdahl who is all the things I am not. Sure, I admit it, it’s easy, it’s almost a part of human nature to imagine ourselves as decent, attractive, accomplished, when we are mean-spirited, ugly, paralyzed by anxiety. Or maybe I am thinking of Rimbaud: “Je est un autre.” I is another. I am not me. Me is someone else. Me is someone else. Me is someone else. That makes sense, doesn’t it? I think it does. Me is someone else. Thank god. 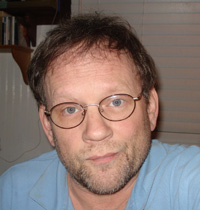 Gary Amdahl is the author of Visigoth (stories) and I Am Death (novellas). He has won a Pushcart Prize and, as a playwright, a Jerome Fellowship. (updated 10/2011)