Translated from the German by Eldon (Craig) Reishus

Tomorrow they would examine him. He resolved to meet each examiner squarely in the eye. Should he wear flashy underwear? He was unsure whether he would be required to immediately bare his torso. Best would be to simply wear a blazer, shirt, and tie—no undershirt. Having nothing to tug over his head would speed matter. Besides, such an action always appeared ridiculous. No undershirt, he wouldn’t perspire. Why should he? Fifteen push-ups were no problem, and he knew the French Revolution inside and out.

Word was that many members of the exam committee wore spectacles. He still possessed a pair from his father. Wearing them he could meet their every diopter, withstand their questioning eyes. He would wave his palms as he gave his loud, clear answers, would display his fingers right down to their crooks. Plus his teeth. His unaffected, intelligent smile would provide many glimpses of their modest sparkle.

Unrequested, he would be sure to reveal his armpits. The very moment his shirt came off, up would go his arms. Whether he should shave them? Best would be to shave only half. One armpit would demonstrate his high regard for silky cleanliness. The other armpit would confirm his manly hirsute nature. The examiners would immediately recognize his aptitude for flexibility. (Should they decide that this or that operation was indeed necessary, then a trained orderly would shave the pertinent site or sites anyway.)

He would also arrive with no knife on his person. It would make such a smart impression when, in a manner lockstep with his earlier answers, he declared: I commend myself to your scalpels! Common knowledge was that every candidate who answered falsely received a second chance. Using a scalpel as pick, an examiner would peek beneath the skin, would determine the degree to which the candidate had “sweated things out.” A centuries-old misunderstanding! What one “sweats out” does not secrete through the pores, but remains within the body, waits beneath the skin. It’s on the tip of my tongue is a mistaken aphorism. Correct would be: It lies directly beneath my skin.

He reminded himself: by no means begin performing push-ups until requested to do so. Push-ups were his minor, and the examiners would likely evaluate any impromptu demonstration as a weakness, a shortcoming. On the other hand, he longed to display his push-up mastery. Push-ups were his trump suit. Were he to spontaneously set forth, he hoped for stern reproaches and as punishment, the demand to perform more push-ups. Through such chicanery, to their amazement and shame, in the end he would triumph. Of course that would mean perspiring quite profusely. His beautiful shirt, with nothing beneath, if he still had it on, would be soaked. Then again, all is fair when sweat is untainted by angst.

His vita he would write in magic marker across his chest. That would simplify things. A skeleton outline of his life, just the highlights. Written in reflected face, it goes without saying—mirror writing. Such would demand a great deal of concentration, but one took the examination only once. A candidate performing a repeat exam? Unheard of. No, he would undergo the examination and he would emerge a success.

He had not yet decided on which scent of deodorant to use in the morning. He had also forgotten to ask whether he must arrive on an empty stomach. He decided to pour himself a glass of milk. He would carefully comb his hair. He would pick up this or that to read. But no, angst was something quite far away.

Rupprecht Mayer resettled in southeast Bavaria after living and working some twenty years in Taiwan, Beijing, and Shanghai. He translates modern and pre-modern Chinese literature and writes short prose. English versions have appeared in AGNI Online and about thirty other print and online journals. (3/2016) 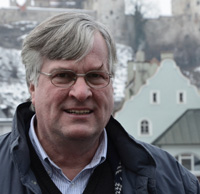 Rupprecht Mayer resettled in southeast Bavaria after living and working some twenty years in Taiwan, Beijing, and Shanghai. He translates modern and pre-modern Chinese literature and writes short prose. English versions have appeared in AGNI Online and about thirty other print and online journals. Read more here. (updated 3/2016) 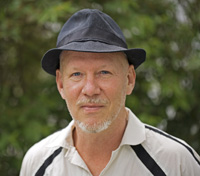 Eldon (Craig) Reishus lives beneath the Alps outside Munich (Landkreis Bad Tölz–Wolfratshausen). He’s an old-school Exquisite Corpse contributor with recent work in Fiction Southeast, AGNI, theEEEL, Apocrypha and Abstractions, Pidgeonholes Mag, Watershed Review, and Word Riot. A German-English translator and an all-around web and print media pro, he originates from Fort Smith, Arkansas. Call on him at his website. (updated 3/2016)
Read more about this translator
Share on Facebook
Share on Twitter
Print page
Follow AGNI on Twitter Follow AGNI on Facebook
Back to top