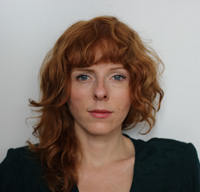 Line Kallmayer is a Danish writer and visual artist whose essayistic work combines text with lens-based media and performance. Her work has been exhibited and published in England, Italy, Denmark, Japan, Greece, Morocco, and the U.S. She is also the author, in English, of the art publications Ten Days with an Exorcist (Green Is Gold, Copenhagen, 2013) and and Bird (2017, Catalyst Press). (updated 11/2018)