Tiago traveled with his wife and kid from Amsterdam to Barcelona and Jefferson liked that Tiago traveled with wife and kid from Amsterdam to Barcelona. Jefferson’s been living in the Netherlands for a while now and Tiago recently followed his steps. We did a lot of group work back in college and a few parties too. When Jefferson was in Brazil a couple of years ago, I wrote him that we should meet and catch up and he said it was a great idea. I came up with three different dates, but he hasn’t picked one yet.

Flor liked a company that sells posters of everyday objects with an artsy touch.

Carlos liked a quote from Bukowski about feeling sorry for doing nothing useful with one’s time. I suppose Carlos still hasn’t finished the summary of his thesis.

Élder liked an article on wine.

Ednardo shared a comic strip that makes fun of parents whose kids just went back to school after summer break. I don’t get it. Maybe only parents get it. Then I remember Ednardo has been single forever and it suddenly makes sense. I mean, his being single makes sense.

I get a suggestion to look at more comics that make fun of parents.

Samara liked an article defending the guys who forcibly tattooed THIEF on the forehead of a teenager caught stealing bikes. I unfriend Samara. She’s married, anyway.

Yara took thirty-seven pictures of her weekend on the beach. I thumb one of them up at random.

Tiago and Jefferson liked an article endorsing coffee. Netherlands Jefferson, not couple-crisis Jefferson. The Jeffersons don’t know each other yet.

Kelly liked a vegetarian burger place in Itaim. She still hasn’t replied to the messages I sent her last week.

Marina shared two pictures of bums in front of large posters of urban landscapes. They look as if the bums are in front of the real landscapes instead of the replicas. I don’t understand Marina’s pictures. I don’t misunderstand them either.

I get a suggestion to check on ads for comfortable trousers. I wonder how they know.

Rodrigo needed less than five hours to bike over a hundred kilometers and dedicated this feat to his girlfriend. His girlfriend possibly took the picture that follows of Rodrigo in tight shorts kissing a medal. He lost a lot of weight since getting into cycling. He gets my thumbs-up.

Evelyn shared a picture of herself and six guys near a bonfire with the hashtags: rasta, indigochild, pleiadian, reggaevibes, picnic, goodfriends, goodfeeling. Everyone in the picture has woolly dreadlocks and relaxed grins. They also have red noses and I suspect the sun in the Central Plains might be too harsh for their fair skin.

Fabrício changed his profile picture. He now contemplates the horizon at the top of a mountain and he really is in profile, which isn’t that common for profile pictures when you think about it.

Maria Cristina liked an article on people protesting that a bridge in São Paulo was named after one politician instead of another.

João liked an article hailing France as the first country to ban plastic cups and plates. One of his friends commented that João shouldn’t forget France also banned prostitution. Did they really?

Maria Cristina shared an article criticizing the haste with which Brazil’s first left-wing ex-president is being prosecuted for corruption. It reminds me of Élder’s article suggesting that justice is slower on the right side. Both Maria Cristina and Élder are divorced and in their sixties. They’re both into wine. I should introduce them.

Luis Felipe and Ednardo liked a phone provider. I think they did it a long time ago so they could get a discount and didn’t realize that every week all their acquaintances would be reminded of their slick maneuvers. But I don’t want to be the herald of bad news. Not on Luis Felipe’s birthday.

Maria Cristina liked an article hailing blackberries. The blackberries hailed are the fruit, not the once smart phone, and the article says they have twenty-two times more calcium than milk. I give Maria Cristina the thumbs-up for being positive. And for being my aunt. And for helping me with the rent sometimes.

Yara liked something a friend of hers wrote in Spanish. I don’t understand it, but I don’t misunderstand it either.

Carlos and Marta lamented the death of an obscure writer.

Nina liked that Ágata is interested in the anniversary party of a bar in Augusta. So it wasn’t a coincidence. Nina and Ágata might have overcome their differences in the name of partying, after all.

Natália was tagged in a picture where she’s crammed with four other girls in the tiny balcony of a flat with a sea view. She put on a little weight since she stopped writing me. One of the other girls in the balcony looks hot, though.

Maria Cristina shared an article about a busted pedophile and said she was appalled.

Flor liked an institution that markets MBAs. I wonder if she finished her MBA already. It had a fancy title that combined international, _marketing, _and luxury. I wonder if Flor is still selling clothes.

I get a suggestion to attend the Jabaquara Job Fair next month. Bastards.

João liked something very long that a friend of his wrote. Very very long.

Marta liked lyrics that go, It doesn’t matter if I’m not / What you want me to be / Your projection isn’t my fault / I take the apathy / But don’t dishonor me.

Evelyn liked an article written in letters from outer space. I don’t get why some waste their time learning Spanish when they can learn Rastafarian and communicate with the entire universe and beyond. I find many pictures of pigeons in the article.

Marta liked a short poem that goes, A good talk / and some attention / is all we need / to relieve a restless mind.

Fernando shared the same article criticizing the Brazilian judiciary that aunt Maria Cristina had shared. They don’t know each other and Fernando is also single, but I’d rather have Élder join the family.

Flor liked a picture of a Roman statue from 120 AD.

Carlos liked an article condemning an opinion-maker who condemns early retirement. I don’t understand why Carlos bothers with these things. He’s already in academia.

Marta liked a long poem that rhymes supplicate with reciprocate.

Marta liked an anonymous quote that goes, Don’t become the person who hurt you.

Vanessa commented on her last weekend’s announcement of a trip to Peru that she’s tired of being on vacation for three months. I can relate.

Ágata liked a picture Nina took of a cloudy sky. Nina and Ágata have definitely overcome their differences.

Marta liked a short poem that goes, I hope life / will accept / this strange / calling / of mine / to be / free. Coming out must be tough.

Larissa liked a picture a friend of hers took in a foreign country. A black-and-white picture of two kids on either side of a young lady. The kid on the left plays the flute, the kid on the right sings, and the young lady plays the djembe. The three of them dress in white and look happy. It’s a beautiful picture, but I don’t know the guy who took it so I keep the thumb to myself. And I’m proud I can tell a djembe from other bongos.

Kléber liked a picture of a one-, two-, three-, four-story shack that seems so shaky it could only have been built starting from the uppermost floor. Below the picture of the shaky shack is the punchline, Brazilians’ disregard for the law doesn’t spare the laws of physics. The Brazilian psyche is a complex topic.

Vanessa shared a selfie in a place many before her have captioned as Machu Picchu. She wears a funny hat and her face is red, but she still looks good. I message her a “Nice hat!” and hope for the best.

Evelyn shared the portrait of an old man next to a catchphrase about following one’s dreams. If she knew what most people’s dreams were, she wouldn’t push us in that direction.

Fernando took a black-and-white picture of an old man rowing a stand-up paddleboard with a dog. They look peaceful. Fernando liked his own picture.

Carlos liked a picture of five men in an elevator with a tag that goes, Keep scrolling, we want to go up. The men in the elevator are somehow famous—one played the writer in Sideways and another looks like Rocky Balboa’s crook of a brother-in-law. I suppose it’s a screenshot from a film or series I haven’t watched yet, but I still find it funny. The men in the elevator do go up as I keep scrolling. Then down. Then up again. He-he-he.

Maria Cristina shared an article criticizing the current center-left-turned-center-right president for criticizing social media. I was starting to miss her.

I get a suggestion to attend an event called Djeff Afrozila b2b DJ Shimza. I wonder what, I wonder why. But mostly what.

Marta liked a quote of by Spike Jonze that goes, Love is some kind of socially acceptable insanity. I’ve never heard of Spike Jonze, but I doubt he ever said that.

Ednardo liked a picture of a young man washing dishes.

Fernando liked a picture of the making-of of a music video. I hope he doesn’t know the singer.

André updated his profile picture with a selfie. Half of the selfie is his son, a quarter his daughter, and only the remaining quarter of the picture is André. The kids are small, but I’d be mad if I were the daughter.

Ju liked the four pictures a friend of hers took of a little girl. Below the pictures comes the line, Every secynd . . . with, u daughter [heart] becomes gold [heart] [heart] [blue heart]. It bothers me a bit that the last heart differs from the other three.

I get a suggestion to buy kids’ clothes.

—Come to my place.

—I can’t, I’m contemplating the universe and the nature of existence.

Evelyn liked a picture of one of her friends. I suppose they’re friends because of his dreadlocks and the color of his nose. Her friend is rowing a lifeboat in dirty waters and smiling to the camera. Well . . . aren’t we all?

I send Luis Felipe a happy birthday message. I send Vitória the same message along with a vintage picture of a cat blowing out candles. 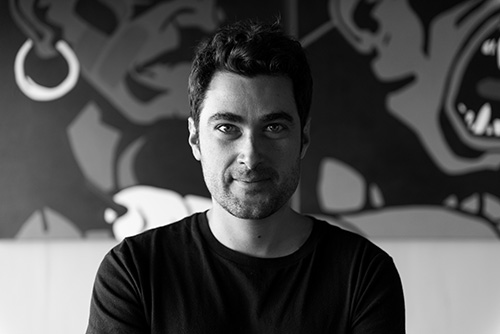 Mauro Guidi-Signorelli writes in both Portuguese and English. His work in Portuguese has been a finalist for the Sesc Prize for Literature, the Mario Quintana Prize, and the Rio de Janeiro Literary Academy Award. His work in English has appeared in The Apple Valley Review and AGNI. Born and raised in São Paulo, Brazil, he has lived for the past fifteen years in Paris, where he works as an engineer. (updated 1/2019)