My favorite pizza place in this town makes a crust that’s not thick enough to be chewy, but isn’t quite crisp either. I order it with green olives, which means salty enough to regret my choice when I wake up thirsty in the middle of the night. It’s takeout only, no dining room.

If I pick up a pizza from Mercurio’s and the guy with the eye patch isn’t working the register, I’m seriously disappointed. I imagine him as the owner. The place is always full of smoke from the ovens, and a dozen or so workers are back in the open kitchen, sprinkling cheese and sliding pizzas into boxes. If you forget to ask them to slice your pizza into wedges, they cut it into squares. I’ve come to think of this as the Midwestern way.

It happened on a Saturday night. A guy in a ski mask burst into the shop, but the owner was quick and shot him lickety-split. The robber crumpled on the front steps. The owner sat next to him and pulled him onto his lap, and the man died there, lying across Mercurio’s lap like Jesus in the Pietà.

Mercurio is the name of the Roman messenger god, after which the thick, silvery liquid in an old-fashioned glass thermometer and the smallest planet in the solar system are named. Mercury has mostly been phased out of thermometer production now that it’s understood to be toxic. I always misremember the name of Romeo’s friend in Romeo & Juliet as Mercurio—the friend who first draws his sword at the Capulet ball, but loses the fight. As he dies he shouts, A plague on both your houses!

There was no Pietà scene, of course, but that’s how I prefer to remember the news story that I found by accident, while googling for the phone number the first time I called in an order. I don’t want to know the ways I’m wrong, and I don’t want to see the gun ads that will pop up in my browser’s sidebar if I research the facts.

Of course, if Mercurio, my eye-patched owner, had handed over the cash that night, most likely no one would’ve died. The robber would have raced off in a getaway car, the workers catching their breath back in the shop, beginning to murmur to each other, the owner staring blankly at the empty register drawer. And yes, the robber would probably have held up another place the next week, and the next. There’s no good way to spin this story.

But I don’t want to look up the article so I can tell this story straight. This is the way I like to remember it: Mercurio looked down into the face of his enemy and smoothed the hair off his forehead, while the ambulance siren screamed in the distance—too slow, too slow. 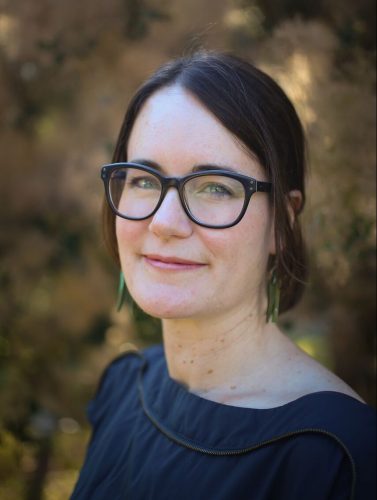 Shena McAuliffe’s debut novel, The Good Echo, won the 2017 Big Moose Prize and will be published by Black Lawrence Press in November 2018. Her stories and essays have been published or are forthcoming in Gulf Coast, Conjunctions, Black Warrior Review, Alaska Quarterly Review, and elsewhere. She is visiting assistant professor of creative writing at Earlham College. (updated 2/2018)