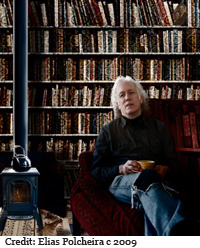 Since 1991 Michael Franco has been at work on a narrative landscape titled A Book of Measure. The first volume, The Journals of the Man Who Kept Bees, was completed in 2000._ The second volume, The Book of the Night Sky, is nearing completion. Individual parts from A Book of Measure have been published over the years or are forthcoming, including The Journals of the Man Who Kept Bees (Lift, 1996) and from the Library of Michael Franco’s A Book of Measure: The Marvels of David Leering (Pressed Wafer, Fall 2012). Franco has also published _How to Live as a Single Natural Being the Dogmatic Nature of Experience (Zoland, 1998) and The Library of Dr. Dee (dromenon/Pressed Wafer, 2006). Franco was a contributing editor of LIFT and directed the Word of Mouth readings in Cambridge, Massachusetts. (updated 8/2012)

An essay on Michael Franco’s Word of Mouth reading series appeared in AGNI 41, along with “Speaking Franco: An Interview with Michael Franco” by João de Mancelos.