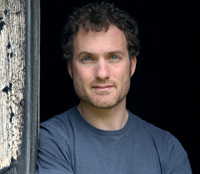 Josh Weil is the author of the novel The Great Glass Sea (Grove Press, 2014). His collection of novellas, The New Valley (Grove, 2009), was a New York Times Editors’ Choice and won the Sue Kaufman Prize for First Fiction from The American Academy of Arts and Letters, the New Writers Award from the Great Lakes Colleges Association, and a “5 Under 35” Award from the National Book Foundation. Weil’s fiction and nonfiction have appeared in Granta, Esquire, One Story, AGNI, The New York Times, and elsewhere. He lives in the Sierra Nevada foothills. (updated 11/2014)