At first glance, Marianne Boruch’s The Anti-Grief suggests that she opposes grief—that is, the act or state of grieving losses—in hopes of conquering it. Longtime readers of Boruch likely anticipate the concept’s complication, however, and her tenth poetry collection’s many capricious turns prove them right. The title poem, tucked at the end of the book’s second section, illustrates Boruch’s concept of the anti-grief. The speaker revels in a trip to Econo Foods on a rainy day because there’s “not a lot of grief in that.” After cataloging her grocery list, she notes that “all the little / anti-griefs add up.” It’s not that she wants to vanquish grief; instead, she wants to redirect her focus to something else. To do so, she fills her days—and eyes—with unassuming things, with salmon fighting “uphill in waters blasting / brilliant” and “a paper ruler made / to measure” wounds, with “was it deer I saw? A little one and maybe / its mother” and even Albrecht Durer’s engraving of Adam and Eve. Through attention, Boruch cultivates objects into anti-griefs: talismans against the transience of life, mind, and body, those things fated to eventually be “[n]o longer no longer no longer something.”

Although the book is ambiguous about a specific occasion for grief, one wonders if this is a book of elegies. Defined in Edward Hirsch’s A Poet’s Glossary as “a poem of mortal loss and consolation” that “ritualizes grief into language and thereby makes it more bearable,” the elegy is one of the most enduring and abundant poetic forms, in part because its occasions are ubiquitous and in part because the elegy does more than lament. Contemporary elegies are self-conscious, R. Clifton Spargo notes in The Oxford Handbook of the Elegy; he reframes them as “anti-elegies” because they are about the elegizer’s grief and elegiac action rather than about the person(s) elegized. “See? What you write, writes you back,” Boruch declares in “Women.” If you write about what preoccupies you, you will be preoccupied by it. Better to, as Dickinson says, “tell it slant,” so that grief lands only a glancing blow, something glimpsed out of the corner of the eye while you focus on something else.

In one of the collection’s many ekphrastic poems, Boruch focuses on Vermeer’s Woman In Blue Reading A Letter:

You have mail! beams the exhibit into
witty. Those curators. It could be the newest
among them: yes, let’s!
What a welcoming principle, humor.

3.5 centuries, staring straight down
that woman keeps reading, no ear
for puns, for such lightness of being.

The absurd juxtaposition of the woman’s attentive reading and the exhibit’s frivolous framing characterizes Boruch’s attention. Rarely are things just what they are; rather, they are what they are in relationship to one another, in their physical and emotional contexts. But what’s the emotional context here, provided by the speaker? At first it seems the speaker delights in imagining the tacky presentation of the artwork, but soon it seems she laments it. The painting’s effect—the loneliness of it, the anticipation—seems to be canceled out by the shrill, offkey exhibition text. But as she looks deeper, the speaker projects something more complex and more human onto the woman in blue:

Nothing stops her search
for something. Hearts could break or mend
however badly as she reads, tiny
valves doing their best,
the blood flow. Yours. Mine.

Her attention is unyielding, and thus the letter itself might qualify as an anti-grief—just as the painting is for the speaker, who wonders about “the light / in her room” being “the ordinary same endless // as in our rooms,” a familiar experience, even three and a half centuries on.

As Boruch’s gaze moves over objects, she allows meaning to take hold, dissolve, and reform, akin to a recognizable shape in the clouds that falls into abstraction and then reassembles into another recognizable shape. Perhaps this is not so different from the experience of reading a poem. Writing within In the Blue Pharmacy, her 2005 collection of poetic-craft essays, Boruch describes “poetry as figure”—maybe a figure (of speech), as in a metaphor, or else a figure, as in the shape of a body—which is rendered through the act of reading “because the eye moves…line always the place where spatial and auditory elements cross. That is, where space and time cross. One sees it and one hears it.” The attention one lends a poem, then, transforms poetry into a physical experience, something with which the reader’s body, not just mind, interacts through time. Boruch seems to revel in what might be called sense-mirrors—that is, textual elements that produce a physical sensation within the reader—especially when they echo an action or theme present in the poem.

Take, for instance, the book’s first poem, with its catalog of renouncement reminiscent of the lost things listed in Elizabeth Bishop’s “One Art.” It begins:

The syntax begins normally enough—“I gave up the pencil,” subject verb object, followed by “the walk in woods, the fog / at dawn, a keyhole,” another object plus another and another—but soon Boruch ventures into more abstract territory with a “habit,” defined peculiarly as a “habit of early,” a habit of adjective, perhaps referring to waking up or arriving early. Another habit is then defined: “of acorn into oak,” a nut growing into a tree—which is a habit of nature’s, not the speaker’s—but it’s a habit presumably witnessed by the speaker over time. Like all things in this list, it is renounced: the habit has stopped. As the speaker changes behavior, the world’s behavior changes. Here, a new catalog (to characterize the stopped habit “of acorn into oak”) arrives within the larger catalog (of renounced things): “bent     tangled     choked.” On top of the zippy and complex syntactical shifts, Boruch plays with sound, from the long vowels of “fog”/“dawn”/“lost” to the near-onomatopoeic consonants of “oak”/“choked”/“ache,” creating a dense sound-weave that might distract some readers from the language’s meaning. Only five lines into the book, Boruch has taught her readers that attention—to detail, syntax, and sound—is paramount to understanding and reveling in her poems.

Boruch is also a master of choreography who deeply understands the line’s guile. “On Halos,” another ekphrastic poem, illustrates this skill with lineation:

The painters aren’t reverent. Better, they’re
earnest and love the outrageous
layers of things. A halo: to see in the dark
and be perfect, a standard
miraculous skill right up there with—
Pick one: flying through clouds, arms

Straight out past stray birds thinking you’re
the lunatic, or going invisible
in a crowd of the jubilant, the depressed, the mean,
the sweet, the relentlessly self-absorbed.

As the painters “love the outrageous / layers of things,” so, too, does Boruch love the layers created through lineation, especially when the line offers a separate unit of meaning from the sentence(s) to which it belongs. The painters both “love the outrageous” and “love the outrageous / layers of things”; to “be perfect” is “a standard” and “a standard / miraculous skill.” Later, the birds are “thinking you’re the lunatic, or going invisible” even as “going invisible” is also another skill in the “pick one” catalog. It’s easy to spend time examining Boruch’s every choice, from a line break to a poem’s overall form, because she is such a consummate craftsperson.

As her tenth poetry collection, The Anti-Grief marks another astonishing addition to Boruch’s oeuvre. It builds on some of her other collections’ themes—ekphrasis, for instance, and death—but makes them even stranger through her idiosyncratic language and complex associations. Like her two most recent previous collections, Eventually One Dreams the Real Thing (2016) and Cadaver, Speak (2014), The Anti-Grief ends on a long poem. “Keats Is Coughing” braids together the poet’s residency at Denali National Park with a visit to Keats’s house in Rome, which she describes as “a ridiculous layering, this Rome in that Denali.” Full of tangents and switchbacks (“Fine. Fuck it. Start over.”), of Whitmanic celebrations (“Look! // Nearing a bear, the young caribou abruptly / hesitant, shy as a leaf”), of Dickinsonian angst (“The wilderness in us / is endless”), the poem is remarkable for its tremendous, epic sustain. No doubt a poem like this one, paired with the small and precise meditations of the rest of the collection, situates Boruch as one of the most versatile poets writing today, and one all poets can learn from. Here, the poems are corporeal in their orchestration of interconnected systems, and they move like bodies trained for leaping. 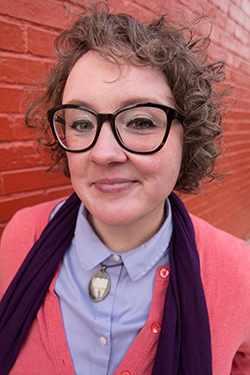