_
No Surrender: Writings from an Anti-imperialist Political Prisoner_ by David Gilbert. 300 pgs. Abraham Guillen Press and Arm the Spirit, Canada, 2004.

I woke this morning from a dream about Dave Gilbert. Dave is serving a life sentence in New York State for his part in an attempted robbery of a Brinks truck in Nyack, New York, in 1981 during which a guard and two policemen were killed.

I haven’t seen Dave Gilbert in thirty years, nor is he the sort of fixture in my dream life that some old friends or acquaintances become. I knew Dave at Columbia College in the late ’60s, when he was the gentle yet charismatic center of an anti-war movement that had not yet turned to dogma. I knew him later in Weatherman, the left splinter group of Students for a Democratic Society that was committed to violent revolution and driven by a potent though short-lived combustion of ideals and idiocy. I lost contact with Gilbert when the aboveground unit of Weatherman folded, to be replaced by a Weather underground to which I did not belong. The War in Vietnam ended in 1975. Weatherman became extinct not long thereafter, as members began to surface. But Dave stayed hidden for six more years, until flushed out by headlines about the botched Brinks job.

I wish I could remember more of this morning’s dream than the conclusion, which had something to do with a smiling Gilbert on a rowboat and some turtle (or possibly duck) eggs. It’s not inconceivable that the eggs were in some sense his progeny, fertilized with his politics, and he was sending them out into the world. Or it could be that just being on a rowboat, as opposed to in a jail cell, gave him pleasure. Whatever its meaning, it’s obvious why I had the dream now. I’ve recently finished Gilbert’s book, No Surrender: Selected Writings of an Anti-Imperialist Political Prisoner, a collection of writings from jail. There’s a picture of Dave on the cover, smiling, looking like he’s hardly aged. That smile, ready to turn into a laugh, often a laugh at himself, brings back all the feelings of affection he triggered in me, in so many of us, way back when. Which is why this book was much harder to read than I expected.

I expected the slogans, and so was not surprised to find them in abundance, preserved after decades in jail-time amber. But it was painful for me to deal with the coexistence in the book of the smile and the sloganeering. I’m not referring to the smile in the cover photograph. I noticed that later, in fact. And when I did take it in, it only confirmed what I had already felt, namely that something of the deeply admirable Dave Gilbert I once knew was alive in the sloganeering prose itself, struggling to be heard, to make an impact, through a politics others took on in a moment of emergency and have long since shed. Zionism equals racism. America is imperialism. The Third World is victimhood and oppression. World revolution is the only cure. Armed struggle is the only means.

That Dave’s spirit is caught up in such views is the other incarceration he has to deal with, besides the one represented by a picture of barbed wire on the front cover of the book, under the photo of his face. It’s true that Dave’s intelligence isn’t absent from the writing. He works with old formulae, kneads them, massages them, tries to tease something new out of them, sometimes stretches them almost to the breaking point, but invariably falls back and is bound by them again. His efforts to get the most out of Marxism, to make it last, remind me of the attempts by Ptolemaic astronomers to get weirdly spinning planets right by means of one more perfectly placed concentric circle. I’ve heard it said, in Dave’s defense: What can you expect? He’ll be in jail for life. But then, I remember that other ’60s slogan: jails are universities.

One issue Dave wrestles with repeatedly is Lenin’s idea of a revolutionary vanguard. In Gilbert’s experience, Leninist vanguards always encourage leaders to be “manipulative and commandist,” while turning cadres into obsequious followers concerned to “curry favor.” Gilbert gets to the point of suggesting this is not accidental, and that the whole idea of the Leninist vanguard—the organizing principle of Weatherman and presumably the later underground cells to which he belonged—is “seriously flawed.” But when I read that, I want to say: flawed is too soft, Dave. Flawed fudges it. Try authoritarian, outdated or just plain bad. Ditch the Leninist vanguard, Dave, and think through the implications. What’s left, at that point, of the revolutionary cure-all? And if revolution isn’t THE solution, doesn’t the problem itself need to be utterly reformulated?

The truth, though it did not manifest in my dream, is that I’m furious with Dave Gilbert. Yes, I’m touched by the smile. I recognize the old Gilbert when I read: “The starting point for me is identifying with other people. That solidarity, that tenderness, mandates standing with the oppressed—the vast majority—against the power structure.”

When he fills out the picture, writing of “[t]he 50 percent of children in sub-Saharan African suffering from severe malnutrition, the women and girls sold into sexual bondage in Thailand, the homeless kids scavenging in the streets of Sao Paulo, the prisoners with AIDS locked in isolation in Alabama” and concludes that “they are all precious human beings whose lives matter,” it could be 1965 again. He could be on the sundial on Columbia’s campus, its rallying point, orating passionately, beseechingly in that vein, either to crowds of students or just a few passersby.

But Dave Gilbert’s militant compassion hasn’t worn well. The Brinks robbery showed it to be a selective, ultimately self-serving kind of fellow feeling, a supremely arrogant compassion, at home with excuses, above any law. Nowhere in this book is there anything even close to an honest accounting of why Dave Gilbert will be in jail forever. A foreword by black activist Marilyn Buck tells us he’s being punished for “political acts and [a] stance in support of the Black national liberation struggle.” The three people shot to death on October 1981 in Nyack, New York, don’t even get a mention from her. Gilbert’s capsule summary of that event is no better. He says that with other “white revolutionaries” allied with “the Black Liberation Army” he tried to “take funds”—what an interesting elocution, “take funds”—from a Brinks truck “with the unfortunate result of a shoot-out in which a guard and two policemen were killed.” What shallow rhetoric, as if it never had occurred to Gilbert or his comrades where trying to “take funds” from a Brinks truck might lead.

What made the possibility of killings so easy to contemplate in the first place, and to be blase about when the shooting was over? This attempted robbery took place six years after the Vietnam War had ended, that war that confronted so many of us with terrible choices, whether we were in Vietnam fighting the war or here, fighting against it. By 1981, you couldn’t plausibly say Vietnam made you do it. You couldn’t credibly say the ’60s made you do it. What could you say, in 1981, that made you think it was sane to employ what Gilbert calls “armed struggle (AS)” against a Brinks truck?

When I think of Brinks, and everything Dave Gilbert doesn’t try to say about it, lacking the language, maybe, or the conscience, it wipes the smile right off his face in my mind’s eye. I lose all sense of the gentleness beneath the sloganeering. I find myself unconflicted again, and more than willing to say that for all his avowals of humanism and compassion, this book is mostly an exercise in evasion. It’s a lesson in what not to let history make you do. My instinct tells me that’s not a trivial lesson to absorb right now, what with a seemingly endless, misbegotten war abroad and fierce polarization about it here. 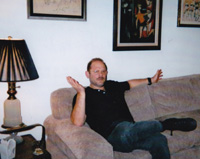 Harvey Blume, a freelance writer and author, is back in Cambridge after an attempted return to his hometown, Brooklyn. (updated 7/2012)