Once, on the steps of a cabin in wild Montana,
just before dawn I stood stunned
by that delirium of stars.
I’ve looked from a friend’s apartment in New York
at nine o’clock in the evening,
likewise astounded by countless windows.
Light everywhere. Light everywhere. And dark.

Coleridge opined that the sublime
can make us feel like nothing.
I’m sure I’d have known as much without him.
The older I become the less I aim
at epic self-expression.
It’s best, I think, as I didn’t always,
to keep my counsel in face of sights and themes

that lie beyond my ken, right where they’ve lain
lifelong, though once ambition
obscured all that. But I check myself:
I’m no more nothing, in fact, than anybody.
My memory feels boundless,
and if it fetches no sublime,
still moments may be fashioned into stories.

As randomly as I might choose a star
or a single light from some high-rise,
I summon a time—or it summons me—
when I and my son, then just three years old,
walked though a patch of woods
to spy on a hidden beaver pond.
I longed for this adventure to unfold

exactly as it did. The wind came right,
and just enough of day
remained for both of us to see
three beavers swimming, a mere five feet from where
we crouched in pond-side reeds.
Clear as judgment in my mind,
the rasp of roost-bound crows, thick August air,

that tannic orange of the cruising rodents’ teeth.
My son appeared transported
as we left the place by early starlight.
“How was it?” asked his mother back at home.
“Oh, Mom! You should have seen!
There were some bugs in the water! They all were swimming!
All of them were swimming around and around!”

In my twenties then, I didn’t know
how not to feel let down.
I know some things today, that is,
that compensate for slackened aspiration.
That child is forty-seven,
his children much older than he was then.
I study my boy. I’m lost in speculation:

I resembled him, I hope, in intending kindness.
In my case, though, vague zeal
distracted my heart and mind and soul.
He’s taking his daughter to ski this afternoon.
They’ll command an epic view,
yet it may be only the shape of a mogul
or cloud that, come the evening, she’ll retain.

And my son? He has perhaps already traveled
like me to where all types of light are local. 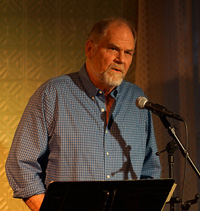