On the plane with my mother, barely seventeen, I lit up, I struck a match, I lit the cigarette. It was when you could smoke in all the places you went. On busses, trains. We sat and smoked. Plumes of smoke lifting from our seats. We were all smokers. We shared, we took it in together, on planes and busses, smokers huddled in the back, the non-smokers coughing but okay with it, or not okay with it, but what could they do? We rode around with my father’s unfiltered Chesterfields burning in the car then stole them from him, went out into the fields to smoke. When we couldn’t find the smokes we smoked straws. We went into the cornfields and made corncob pipes and smoked them. We burned what we could and breathed in the smoke. You could see us huddled in the dark, way beyond the house, the red tips of whatever we were smoking bobbing up and down. We learned how to smoke backward, how to hold the tip inside the mouth and smoke. Later we smoked joints, we blew smoke from one mouth into another. We filled each other with smoke. We became bold with smoke. We smoked in school bathrooms, someone watching in the hallway. When teacher came in, the room was filled with smoke, and the girls with their red lipstick and fishnet stockings, rings of smoke out our noses, but no one smoking. We smelled bad. Everybody did. It was something to share, intimate in its way. Teacher standing there in the doorway of a room of teenage girls with their fresh but pimpled faces and smelling of smoke. Our fingers were stained as if we had been painting with smoke, tattooed by smoke. You could lift your fingers to your nose, you could smoke the fingers. Assuage yourself. Comfort yourself a bit. If we didn’t have money for them, we stole them. We stole them from mother’s purse. We stole them from stores. We picked up good butts off the streets. The cars we drove in were filled up with it. There was nothing but the fog of smoke. Clouds you could see coming in and out of us. We had lit ends in our hands. We carried matches. We carried lighters. We were never without smoke. We sometimes rolled the ends of cigarettes we found in ashtrays. We bought loose tobacco and we rolled it up. We were smokers and we were not ashamed to be smoking. To be walking around with that lit thing. To throw them lit from the windows of cars. To watch the embers explode backwards on the highway. Now and then someone’s habit burning little holes in their clothes. There were holes in everything. Little black burns on countertops, on tables. On carpets. Bedspreads. We snuffed them out on the floors. It was everywhere around us. The teacher smoked. The doctor smoked. Mother smoked. And where do we linger now that we quit? That cigarette turned round backward. The lit end inside us. Where did we go? Can you still smell it on us when we walk by? We would light up if we could. We need a smoke now. We need some grey fog billowing around us. We need some calming down. Some giant weed burning between our lips. The balconies are emptied of us. The back lots are cleared of our butts. Our cars smell like cars. Our hair is shiny. Nobody’s standing outside the back door burning. There’s nothing on fire. 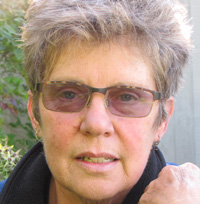 Carol Potter won the 2014 FIELD Poetry Prize for her fifth book of poems, Some Slow Bees (Oberlin College Press, 2015). Her recent poems have appeared in FIELD, Hanging Loose, AGNI Online, River Styx, and The Tupelo Quarterly, and others are forthcoming in Calyx and Sinister Wisdom. More information and samples of her work can be found on her website, cwpotterverse.net. (updated 4/2015)