The semiotics not of sex but of concealment, the lessons,
_     _the legacy of dark.
It’s a strongbox in the basement, a corner in his woodworking shop.
_     _Inside, a prostitute of
forty years ago is swallowing a massive, blue-veined cock.
_     _The man is wearing
boxer shorts around his knees, white socks. Another man,
_     _a black man, enters her

the father always silent as the men within these pages.
_     _How old is the boy when he finds them?
Twelve? Fifteen? Always the humid smell, his ears alert,
_     _waiting for the car door slam,
the front door unlocking as his parents return from their
_     _Friday dinner out. Yes,
he is touching himself. The photographs. This is not how I meant
_     _to tell it: start again.
In the bookstore, the shelves’ collage of body and genital,
_     _stacked up to the ceiling,
each book vacuum-sealed in plastic. From here across the room
_     _they’re a sheaf of postage stamps
from some debt-plagued island dictatorship, its exports baseballs,
_     wooden carvings, phalatelic rarities.
And I am Baby Doc, my shades and leather coat, my kingdom
_     Girls in Leather, American Erotica,

Hustler, Penthouse, Girls Who Take.…The air
_     _conditioner, hissing.
Background music: big band songs. The curtained booths,
_     _my quarters. I would like it
to stop here. This should not be written down. Another poem.
_     _What could it contain?
A playlet. Empty stage and spotlight, my father lugging
_     _the strongbox from a corner.

Spotlight: my father in his hospital gown, the day before
_     _more weeks of electro-shock.
If you look closely you will see him weeping, but I don’t
_     _know how to tell you,
can’t trust what I could say. I return to myself,
_     _and the curtained booth
and the woman’s face, crying too — the director no doubt
_     _goading her to grander

postures of orgasm, her blonde head thrashing, the film
_     _now wavering, flickering,
all the quarters gone. Then I’m paying for the magazines.
_     _On the car radio, white noise
of news and weather, Emperor Hirohito dying. He has not
_     _been told of his cancer.
Such knowledge, his doctors believe, will cause him
_     _too much fright. The Emperor has lost

a half-pint of blood, but today sipped a few spoonfuls of soup,
_     _his first solid food in weeks. 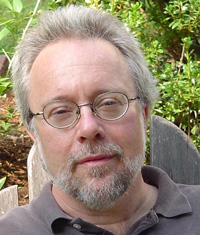 David Wojahn is the author of nine poetry collections, most recently For the Scribe (University of Pittsburgh Press, 2017). A new volume of his essays on poetry, From the Valley of Making, was published by University of Michigan Press in 2015. His collection Interrogation Palace: New and Selected Poems, 1982–2004 (Pittsburgh), was named a finalist for the Pulitzer Prize and won the Folger Shakespeare Library’s O. B. Hardison Award. Among his numerous awards and honors are an Amy Lowell Travelling Poetry Scholarship, residencies from the Yaddo and McDowell colonies, three Pushcart Prizes, and fellowships from the NEA, the Guggenheim Foundation, and the Illinois Arts Council. He teaches at Virginia Commonwealth University and in the MFA in Writing Program at Vermont College of Fine Arts. (updated 10/2017)