Once again my old man has gutted his hearing aids.
On the table beside him, around the smallest blade of his pocket knife,

his hearing aids lay scattered like the scrutinized guts of bugs.
Somewhere in those parts—the coils, the discs,

the blue copper veins—somewhere in that chaos lies the riddle
of sound. Now in the dark kitchen he faces the window

where the first stars tremble in the branches of his oaks.
The house is as quiet as a broken watch.

says as much, and the needles raining in the yard.
The silence around his shoulder is my mother’s arm. 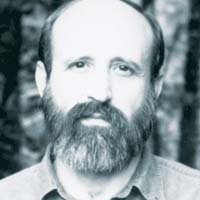 David Bottoms is the author of seven books of poetry and two novels; his new book, Working the Heavy Bag, is forthcoming from Copper Canyon Press. Among his many awards are the Walt Whitman Award of the Academy of American Poets, the Levinson Prize from Poetry, an Award in Literature from the American Academy and Institute of Arts and Letters, an Ingram Merrill Award, and fellowships from the National Endowment for the Arts and the Guggenheim Foundation. He holds the Amos Distinguished Chair in English Letters at Georgia State University and serves as poet laureate of Georgia. (updated 6/2009)