What went wrong here was morning heat and a cracked sidewalk.
Cottonwood fluff piled the gutter and steamed in the light, but we talked

about love anyway, missing it now we looked everywhere and shrank
from signs when we could read them. The famous one on 33, the crank

hand-painted a revision over the old words about Bill Clinton, and joy
lined up the stenciled letters on fresh white paint, an old man and a boy

who would grow up close to a grandfather most drivers laughed about
even if they agreed. But the heat. And the sidewalk. A situation

in opinion columns you read on weekends after you finished mowing.
I let you keep that job to maintain a looser lassitude indoors, allowing

the afternoon in the east window when the sun plowed clouds west,
and deciding there between singing and sighing, forestalled fears at best

the day after the decision on the bakery in Colorado, the gay cake
that wasn’t because it was art, and who would think of us or make

concessions for our sake, stuck here with paychecks that worked like bait.
What went wrong here was a birth certificate—yours—and a long wait

for a real job—mine—that shook us down with the common things
that stumble, or crawl, or rot back to dust-flaked clay. We needed wings

and fed birds outside the kitchen for the vicarious flight,
the tenor of complaints we couldn’t translate despite

the stance of the intrepid goldfinch or the jay’s manifest hatchet.
They would not be leaving, not for good and all, and we’d catch it

if one particular favorite, like the cardinal we called Boyfriend
for his habit on the sill, casual, head cocked like a cork to attend

our business through glass, disappeared. Nothing he feared.
We longed for soaring. If we could we’d outfly him through sheer

will, that knack beyond instinct humans burn like coal to fire
our bad ideas and sometimes better, whole lifetimes that bear

art that can’t be eaten or otherwise used to harm or isolate.
If a baker baked the art of cake; if he presented it on a plate;

if it stood for all he stood for, his law, his staff, his version
of the sacred books, he could market his private obsession

as anything he dreamed to call it, but you say only if he opened
the doors in his strip mall store to the whole as well as the broken,

of flour and butter and fondant roses. Imagine him staying
to observe the ceremony. He’d take his place without delaying

anyone from ring or vow, and he might bow as if his prayers
were homely wrens, due nothing for his smugness, taking to air;

and we could live without the need to worry every error
as maybe meaning what he thought religion means, terror

of his supremacy. We can’t be birds in this heat. We only walk
on crumbling concrete. Our shoe soles stick. It’s not our fault

we’re here where the simplest shape of human touch doubled—
what we call the art of love—is baked into the art of trouble. 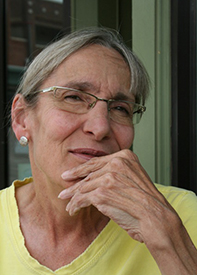