“The ellipses splice us there—where the poetry has risen to the surface of consciousness after how many nights of pain and mind-numbing brutality, after how much saturation in death,” Peter Balakian writes. Trauma suspends language as the human psyche attempts to survive the experience; only through the creation of a new language can the trauma be understood and communicated. In his recent book, Vise and Shadow: Essays on the Lyric Imagination, Poetry, Art, and Culture, Balakian explores the ways in which traumatic experience is conveyed within poetry, nonfiction, art, film, and song through the works of Primo Levi, T.S. Eliot, Bob Dylan, Siamanto, Hart Crane, Joan Didion, Elia Kazan, and others. Balakian reads across form and genre as well as time and place, presenting to us and examining a form of expression that he refers to as lyric language. Created in response to trauma, lyric language is a mechanism of expression that reflects the human psyche as it digests a changing landscape. “The vise–grip of lyric language [ . . . ] gives the poem or visual work or song a value and a legacy as a deep mine of knowledge and culture in which human thought and emotion, language, and insight intersect and mingle, and come together as a distinctive, memorable aesthetic form.”

The aftermath of trauma manifests in the psyche as a fragmentation of perception and sense of self. Balakian asserts that the attempt to understand the fragmented pieces together as a coherent whole gives rise to lyric language, which helps to bring the effects of trauma into focus and communicate the altered inner workings of mind and spirit. In “Writing Horizontal: Notes Toward the Poem as Space,” Balakian’s own writing reveals lyric language as he recalls his time teaching in England. He is home with his family when a plane is bombed, and he is notified that at least one of his students had been onboard. Balakian realizes then that he and his family were likely to have been on that plane as well, had they not decided to stay in England over the holiday. As he looks from the television replaying the bombing to his newborn son in the other room, he attempts to comprehend a sudden shift in his perspective. “I was trying to hold these images together, or not together. I was stuck with them. I was beginning to see the world caught/positioned/struck/divided between such discrepancies and ironies.” Balakian’s language here becomes lyric, reflecting his psyche under pressure after an experience that forced alterations of his perception. Before sharing his poem, Sarajevo, Balakian writes, “I wanted to create as much space as I could for a poem to explore that moment, that place, its history, and my own way of seeing it through various intersecting and fractured lenses that were part of my personal sense of history.”

The effects of mass trauma on the collective psyche can similarly be seen through the use of lyric language. In “Siamanto’s Bloody News” Balakian explores the life and works of Siamanto, an early twentieth-century poet. Siamanto’s collection Bloody News from My Friend is based on a series of letters from a physician serving the survivors of the pre-Genocide massacres in Turkey. While Siamanto is not yet directly confronted with violence, the effects of trauma on his community, and eventually on his psyche, are evident. Siamanto shows us his psyche in fragments by pairing traditional, sentimental modes of poetry with abruptly direct, image-oriented depictions of violence. “By engaging conditions of extremity, torture, killing, and rape, Siamanto attempts to find a language capable of linguistic compression and lyric precision to allow the poems to create scenes, images, and dialogical voices.” Siamanto’s style, his lyric language, gives the reader intimate access to an idealistic youth encountering a mass trauma. As the experience cannot be comprehended or shared through conventional methods, lyric language also functions as a necessary tool for Siamanto and his community. Balakian asserts that, in this way, lyric language serves as an antidote to mass violence. “If the violence is silencing as it is in fact in the acts of killing and torture, the poem emerges as some kind of answer to total silence: a refusal to let the victims go voiceless into the dust.”

In the case of those who have survived trauma, the violence performs its silencing function on the survivors’ sense of self. In “Arshile Gorky: From the Armenian Genocide to the Avant-Garde,” Balakian introduces us to Vostanik Manuk Adoian. Adoian was an early twentieth-century painter who survived the Armenian Genocide and immigrated to the United States, where he changed his name to Arshile Gorky. Gorky did not speak of his traumatic childhood and largely denied his Armenian heritage throughout the course of his career. Until the late 1970s, Gorky’s paintings were mainly appreciated by an audience who had no knowledge of his past. Though his paintings are not depictions of the genocide or his mother’s subsequent death from starvation, their titles, such as “Nighttime, Enigma and Nostalgia” or “How My Mother’s Embroidered Apron Unfolds in my Life,” are deeply evocative of the trauma and the existential confusion left in its wake. Balakian writes, “Even if he only articulated the tip of the iceberg, the rest of it was down there in him and kept bubbling up in his obsessions with human anatomy and nature, in the evocative autobiographical and place-anchored titles of his paintings, and in many of the unique, formal qualities of those curling and writhing shapes.” While the traumatic events were too painful for Gorky to acknowledge directly, a synthesis of his paintings and their titles create a form of lyric language that gives expression to hidden levels of his consciousness.

It seems that lyric language often takes the form of collage, a mixture of styles and mediums, and that this mirrors the way in which the psyche interprets traumatic experience. Balakian describes collage as something “driven by open-endedness and incompleteness,” therefore capable of depicting cultures where change and transformation is the reality. Balakian explores the collage works of T.S. Eliot, Robert Rauschenberg, and Joan Didion as reflections of a changing frontier marked by increased questioning of social constructions and heightened self-awareness. “If they are ‘fragments shored against ruins,’ it is not a ruined Didion we encounter, but a writer who wants to collect and render the fragments so cultural confusion can come into whatever focus it might—the way shards, rapid cuts, and edits bombard consciousness.” For Didion, the medium of collage is itself a form of lyric language. The collage form merges several aspects of the self as the writer is confronted with profound change and social instability. Balakian makes the claim that while the experience is still internalized, lyric language allows the artist to process rather than succumb to the conflicting experiences, ideas, images, or memories.

As lyric language provides the artist with a medium to express shifting perspectives, it also creates a space of connection and dialogue with the admirer of the work. In “Bob Dylan in Suburbia,” Balakian details his initial exposure to Dylan. As a restless suburban teenager beginning to notice class, race, and other social realities, Balakian finds comfort in Dylan’s style: a musical collage that communicates the national unrest and cultural insecurity of the time. In his appreciation of Dylan, Balakian examines his lyrics for an in-depth analysis and concludes: “Dylan’s words couldn’t always survive the page alone, because they were made for this medium that Dylan had invented: his voice, his harmonica, his guitar, his arrangements that were strangely simple but complex, now expanded to include electric guitars, keyboard, organ, piano, horns, drums, and other percussion instruments.” Dylan’s unique combination of sound and lyric created a collage that struck the young Balakian in its interconnectivity. “[H]e invented what I call literary rock—that fusion of music and language, embedded in a unique acoustic that embodied something of what it means, still, to be living in our age.” Suburban life and national events have, in Dylan’s songs, a place to speak to and for one another.

Lyric language provides a unique perspective of events that is more intimate than traditional historical text. In several of Balakian’s essays we are given insight into poetry’s ability to reflect internal trauma in relation to external events. “The poem offers us various webs of signification, insights to the inner life of social chaos, seen deeply in poetic imagination.” Traumatic experience serves as context while lyric language possesses the power to transform experience. “I don’t mean to suggest any easy correlations between life and art; poems have their overlappings with lived experience, but the poem is always an invention and an imaginative transformation of whatever filaments of experience underlie it.” The creation and appreciation of lyric language both serve as instruments of empowerment by allowing the psyche to exercise control over the effects of trauma. Through lyric language the witness or survivor can regain power, either from or within the traumatic experience. Through Primo Levi’s account of reciting Dante while in Auschwitz, Balakian grounds us in this power: “In the syntax and rhythm, in the drama of images, all of a sudden, here at Auschwitz, there is a bit of joy.” 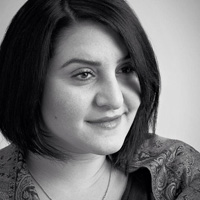 Ani Kazarian writes essays, short stories, and screenplays, and is at work on her first novel. Her research interests include literature, trauma studies, and cultural studies. She lives in Los Angeles with her husband. (updated 1/2016)