On the deceptively black-and-white Ed Sullivan Show,
The satyr of the sideburns was playing some of his recent hits,
“Don’t Be Cruel,” “Love Me Tender,” “Ready Teddy,”
And “Hound Dog,” for the cultural education
And liminal exaltation of a mostly white audience
That had never seen, felt, had, or even heard of the blues.
He was dimpling his cheeks, puckering his lips, swiveling
On his blue suede shoes, and gyrating his magnificent hips
On a stage that, according to one published document,
Featured “large, artistic guitars as decoration.”
He was doing this especially for the women of our nation
And their ephemeral liberation from the gray militaristic
Forces of repression—for the willing young women
Who’d waited in line for tickets to the live performance
At the CBS television studio in midtown Manhattan,
For instance, but also for the vicarious pleasure of viewers
Who’d tuned in to watch. He was doing it for the libidinal delight
Of working-class secretaries in split-level family rooms
And Sears-kit bungalows all across the country.
For hayloft honeys in corn-fed Nebraska. For clam-shack cuties
In Rhode Island and Massachusetts. For apple-cheeked lovelies
In Washington state, Ohio, and the woods and dells of Vermont.
And for surfboard bikini beauties in sandy southern California.
He was doing it with a vengeance, doing it in style,
For heartbroken southern belles and dance-mad black girls
In Alabama and Mississippi, and for troubled girls as well,
Heartbroken and pregnant in pink bedrooms decorated
With posters of his movies. And for the dangerous ones, too—
No, not chicks, broads, dames, or babes, not sluts, cunts, or whores.
How dare you even consider using that language around them!
But for all of those understandably adventurous women
Laughing their heads off and flirting with the management
On red vinyl barstools in cheap bars and hamburger joints.
Even for all of those femme fatales who were born that way,
Slurping frappes through straws at clean-cut soda fountains
In streetcar suburbs. For women of color, women of rhythm,
Amazed that this white man had synthesized the influence
Of basic black rhythm and blues. And for women of finely tuned brains,
Cultivated tendencies, high self-esteem, and excellent wardrobes
Who lived in sanitized zones around the great universities.
Not to mention for those equally worthy impulsive ones
With raw brains, honed instincts, and tragic, movie-queen beauty
In red-light districts, blue-collar boroughs, and urban bastions
Of bohemianism. It was happening all across the country,
And that’s what Elvis was playing for—even for the cheap thrills
Of those few distinguished ladies of respectable bearing,
Housewives who’d put their lives on hold for years
To propagate the species, slapping their bridge hands face-down
On fold-out card tables while their husbands were out with the boys
Playing poker and bowling. Women of a certain age
Rising from their folding chairs to do the Boogy-Woogy,
The Mashed Potato, the Jerk, and the wild Watusi
In living rooms in the suburbs, just beyond the edges
Of our soon-to-be-abandoned and razed-to-the-ground cities. 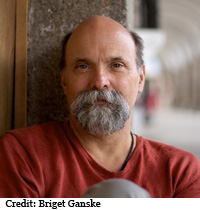 Scott Ruescher is the author of the poetry collection Waiting for the Light to Change (Prolific Press, 2017). He has won _Able Muse’s Write Prize, Poetry Quarterly‘s Rebecca Lard Award, and, twice, the New England Poetry Club‘_s Erika Mumford Prize for poetry about travel and international culture. His poems have appeared in Ploughshares, Solstice, The Common Ground Review, The Boston Phoenix, and elsewhere. He administers the Arts in Education program at the Harvard Graduate School of Education and teaches English in the Boston University Prison Education Program. (updated 7/2017)