At last our Emperor gave orders—we began
confiscating books and rounding up scholars
who had slandered the royal family
using ancient stories to mock the present.

All books in our Empire had to be surrendered
to officials within a month, except those
on agriculture, divination, and medicine.
Disobeyers would have their clans erased.

About five hundred scholars were taken
to Bliss Hall to be tried by the ministers
who matched them in learning and eloquence.
Our swords were gleaming in the sunlight

that poured in through the open windows.
How pasty their faces suddenly turned.
They pointed a finger at one another
trying every trick to save their own skins;

some peed and crapped in their robes,
one stopped breathing before his trial.
Thank heaven for the divine retribution—
over four hundred of them were hauled out

and dumped into their joint grave.
We had fun, slapping and spanking them
with our swords before we knocked them down.
Of what use were their clever tongues?

Where were their headfuls of knowledge?
Under our shovels, in the smoke of books,
they screamed Mother and called us Brothers,
but no words could deter cascades of dirt. 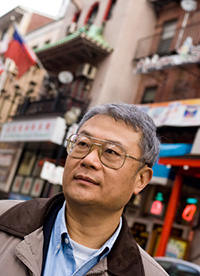