My mom can’t understand why I play under the table, not on top of it, like she used to. Why inside the wardrobe, not on it. She grew up in a cold rental apartment full of mice, and playing on the floor was simply impractical. I was afraid to climb on top of anything; I would rather be cocooned inside. Difference in personalities you might say, or stronger rodent repellants.

I spend hours playing in my grandparents’ wardrobe. It’s pleasant to be invisible in the soft darkness. I cover my head with my grandma’s headscarves for church, black silk with red flowers. They smell like her rosewater perfume. I pretend to be a princess in a bewitched castle waiting to be rescued, but not in a real hurry. I put on one of my grandma’s calico dresses, which drapes to my feet like a princess’s gown. I open and close her old purses. I sing, “When I was a little shepherd and I would graze the sheep,” petting the velvet collar of my grandpa’s raincoat, which smells of plastic glued to cloth, mixed with his cologne. In my grandparents’ church, there is a holiday where everybody has to go underneath a table covered with a lace tablecloth. I love staying under longer than the old people with their knee pains. I would come out slowly letting the lace caress my face and forehead like a bride’s veil.

Grandpa Danko, the choir conductor, carefully sculpts his moustache every morning in front of his army mirror, with his army scissors, and puts them back next to the cologne in a big wooden cigar box. He ends up looking like Mahatma Gandhi, but never walks with a cane, always with a big, black umbrella. Canes are for old people, while gentlemen carry umbrellas when it doesn’t rain.

Every Sunday after church, he pulls a small package of unleavened bread-nafora-out of his raincoat pocket. My grandpa has this copper ring on his finger, which glitters with reddish-gold sparks when he conducts his choruses. With his long arthritic fingers he opens the nafora package. His joints are arthritic, he explains, because when he used to work as a manager in the transportation office selling monthly cards, he wrote on a glass-topped desk for forty years. Two things became clear: first, one shouldn’t work on desks covered with glass. The second was that one should treat people with respect. And he did just that.

He also put together choruses every chance he got. If he met more than three people and they were not singing, I knew they would be in about ten minutes. He’d start to hum an infectious tune, like Ode to Joy, and in a few moments someone would unconsciously join in. My grandpa would go two notes higher and sing the second voice, the polyphony. The harmony would disarm the rest of the group, and they would surrender and start singing as if spellbound. My grandpa would nod to me with his works-every-time smile and start conducting, flashing the copper ring.

Thus he had also created the chorus of the transportation workers, and another one for their wives and mothers. Two more choruses respectively for their male and female children. And then of course others, not related to the transportation business, like the one for juvenile delinquents, and over twenty church choruses. They were all made up of regular unsuspecting folk that we met in lines for food and on trains, and before they knew it, they ended up on stage at Bulgaria Hall.

Old colleagues used to come and chat with him or play some backgammon long after he had retired. He had regulars coming in on alternating days of the week, in morning and afternoon shifts, so the backgammon schedule was manageable and did not get out of hand. My grandma served each sparring partner a spoonful of cherry or pear preserves, on a small crystal plate, and a tall glass of water. Everyone was “comrade” back then, but she called them mister and they called her ma’am. The old-fashioned and practically illegal way they addressed each other made me feel like we were a royal family in exile. They drank fake coffee made of roasted chickpea powder, so their blood pressure wouldn’t go up. They used to dunk cookies in it and give me a bite. The sound of the small dice and the round chips hitting the wood; Turkish words like dushesh and etsi; the jokes and laughter of the retired transportation workers and chorus singers, with their fedora hats and sharp moustaches: these were a few of my favorite things.

I didn’t know that song back then, because of the Iron Curtain. But I knew “When I was a little shepherd and I would graze the sheep. . . .” Grandpa Danko taught me how to sing it, not through my nose, but through the diaphragm and the throat. I got accepted into the children’s chorus Fresh Shift. I started singing for Party congresses and parades.

Our choirmaster had lost her voice when she was young, so she whispered the words of the songs and then played the melody on the piano. We were to combine both and make the song. We also had to wear house slippers in the building. One hundred pairs of kid’s feet rustling in the corridors made one great shushing sound. Our choirmaster loved the quiet.

Another requirement was to keep your forehead exposed. I used to have bangs and wore a hairpin at choir rehearsals. One day our choir master whispered that we could not continue until the mademoiselle with the bangs leaves the room. I didn’t realize she was talking to me, because I had somehow lost the hairpin. No one called me mademoiselle, except the transportation singers in our castle. My grandpa told me that Fresh Shift is not worth my tears and that there were plenty of other, more pleasant choruses.

He started taking me to all his rehearsals. I would sit on his shoes at church, looking up at the choir and the frescoes through my long bangs. I would breathe in and hold in the powerful music until it started to vibrate inside me. It lifted me from my grandfather’s polished shoes and carried me higher, in circles, through the dark air, thick with incense. I would only come down for the nafora.

The nafora was made before dawn by a widow or an unwed woman, a “clean” woman. She takes a bath, says a prayer, crosses herself, and mixes flour with water and salt. She presses into the bread this wooden stamp which is elaborately carved with bible scenes. Each Sunday, after my grandpa is done conducting, and my grandma and I are done singing in the chorus, we’d bring home some nafora. You get a small piece no bigger than a sugar cube, carefully wrapped in wax paper and then in a handkerchief. You eat it, and it’s never enough, and you lick your fingers and collect the crumbs and eat them too, because they are also holy. 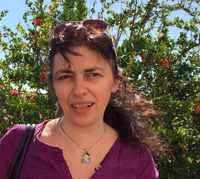 Sofi Stambo won first prize in fiction in the SLS-DISQUIET Literary Contest and was a finalist in the American Short Fiction Contest. She has a Master’s degree in Comparative Literature from Sofia University St. Kliment Ohridski, Bulgaria, and was a graduate student in literature at City College New York. Stambo’s work has appeared in Guernica, Promethean, Ep;phany, Plamuk, The Kenyon Review Online, and elsewhere. She lives in New York City. (updated 10/2015)