Wayne from East Belfast was freckled and burned pink along his widow’s peak where he pulled his hair into a ponytail. He was ex-British forces. At the beach bar, he told us that American soldiers are useless on a march. It’s all upper body with them. Legs for shite.

Tamara met Bagas on her second night in Lombok. Bagas was his nickname; she didn’t know his real name. She said Indonesian men know how to talk to Western girls. They wear their hair long and play in heavy metal cover bands. Tamara said Bagas was going to help her get over a breakup.

After we’d surfaced and removed our tanks on the boat, Petra and her husband, Toms, scolded me for not covering my ears. They made me tie Petra’s scarf around my head for the ride back to the jetty. It’s the wind, they said, the wind can infect you.

With Grace it was, where have you not been? The places she’d seen you could hardly imagine: deserts in Turkmenistan, a cargo ship on the Caspian Sea, Xinjiang, Iceland, Transylvania, Syria. You can always meet people, she said. You tend to connect. But sometimes you want to be alone, to stare out the window and dream.

And when I’d call home, my Dad’s first question was always: where are you?

Carlos with the tan lines on his arms and thighs and ankles was the only American domestique on his team. He had tan lines where his eyes squinted into the sun. On the train Renee touched his face and said he should wear sunglasses when he rides. He ducked his head and smiled at her, but he was shy. He didn’t do more.

Sally came back from Sri Lanka saying you don’t actually need to wash your hair. It’s a myth. She had a glow about her even if her braids were frizzy.

Hawaii was too expensive, but in Taiwan Jeff could teach English and save money. He’d take his surfboard onto buses and trains to get to the northeast coast where the waves were best. Honeymoon Bay, Wai Ao, Fulong Beach, yet always thinking about the North Shore.

At the stations, the kids come up to the train windows and sell you a Coke and a box of pineapple fried rice with a couple slices of cucumber, and you think you’ve never tasted anything so good in your life.

Silas moved to Beijing to connect with the Chinese side of himself, the side he got from the Dad he never knew. He was going to stay six months to study Mandarin. Eight years later he was still there.

Casper and Stina looked like brother and sister, same white curls, same pale skin, same tidy backpacks and hiking boots, almost the same height, which was tall. We thought they were Swedish. But Americans never think about the Danes or the Norwegians.

Lila was a Mennonite, working as a nanny in Taipei. She wore glasses and didn’t color the grays in her hair even though she was only thirty-two. We sat and had coffee one afternoon. I asked a lot of questions but she didn’t mind. It wasn’t her answers so much, it was her peace. I wanted her peace.

You try to avoid the ones who complain about the locals.

The lady in Budapest took five U.S. dollars from each of us so we could sleep on camp beds in her living room with the tall, elegant windows. After the Wall came down, it seemed like every house east of Salzburg had a spare bed for rent.

Her English name was Only and she liked to date Western guys. She was neither Chinese enough for her co-workers, nor Western enough for the expats. She told me going shopping was a normal date and that the man must always send flowers afterward. She told me she dreamt of living in Australia.

It was a great honor for the village that Jonathan and his Dad had come for a visit. So at the banquet they couldn’t refuse the dog meat they were served. It would have been terribly rude otherwise. All we wanted to know was: what did it taste like?

In the Peace Corps, Beth would take the train from Marrakech to Agadir for R&R. She’d fill a backpack with books, music, snacks—all kinds of things to keep her occupied for the four-hour trip. Then she’d notice the local man across from her sitting with nothing, just his hands in his lap, for the whole journey.

You need a book that’s long but hard to put down, so you enjoy it but don’t get through it so fast. So it lasts.

Ruby and Dennis went to Manitoba the first year, northern Alberta the next, once they could call themselves experienced planters. They’d work the season and go on the dole for the rest of the year. They sat in the hostel with a bag of bread and asked to borrow peanut butter for the filling. When they heard I’d rented a car they asked for a ride across the border, but I didn’t want to know their angle. I didn’t like the look in their eyes. I mumbled an excuse and left early the next morning before anyone was awake.

Jonny and Joe flew all the way from Newcastle to Koh Samui with exactly one daypack between them. Two shirts, two pairs of underwear, shorts, swim trunks, passports, open-ended return tickets and enough money for drugs.

The goal is to stay away as long as possible. They buy the drawstring pants and sit in the cheap cafes watching movies and eating banana pancakes for six months, a year and they call it traveling. They just don’t want to be where they’re from.

Pete and Claire fell in to a ditch by the toilet block after too many tequila shots. In the dark we didn’t realize they hadn’t made it to the boat until we’d pushed off from shore. We had to go back and when we found them Clair’s head and back were covered in mud and grit and she was shivering. I had a spare shirt and she used my comb and decided she’d go back to Pete’s room anyway.

Henry was in Asia to launch the channel, so it was just about work and some play. He could have done anything to me, what did he care, his flight was leaving in twelve hours’ time.

One thing you stop worrying about is getting rained on. Everything dries eventually.

Patty embarrassed us with her haggling, and we almost ditched her in Agra. She considered it a personal triumph if she talked the tuk-tuk driver down from a U.S. dollar to sixty cents. Offer half of whatever they say, she insisted. They respect you when you do that.

Every time I saw Joann over those three days she looked like she’d been crying. It was summer and she’d brought her teenaged son, who didn’t want to know Tokyo at all. He sat in their cramped hotel room all day listening to heavy metal. Joann said she needed the overseas teaching experience for her master’s degree. She talked about leaving and staying in the same sentence. I thought she should be stronger for her son, but back then I thought all parents should be stronger for their kids.

Howard was from Missouri; he pronounced it Miz-ou-rah. If I ruin someone’s life for the dollar, he said, well that’s not right. He traveled to China every year even though he couldn’t preach there. He said you weren’t allowed.

We read about Leonard’s arrest in the English-language paper and we couldn’t believe it. We couldn’t just blame it on his drinking or Thailand. There was a darkness. Maybe it had been there all the time.

Then you go back and your family, your friends don’t ask many questions. They nod and smile, but they’re thinking about work or school or what’s for dinner. You don’t want to brag, but you want a chance to tell them that you’ve seen something else entirely.

Argentina was the place she knew she’d fall in love with. That was going to be next year.

Kate wouldn’t talk about it but we heard that she couldn’t have gotten her boys to higher ground without the locals’ help. Marcus got swept out and inhaled so much seawater, it was a month before he could leave the hospital. He was an old man after that. But they didn’t sell. They went back to the island and rebuilt.

Jun took me up to the temple in the mountain, which was a special place for him. On the back of his motor scooter I held on and we escaped the city-shadowed streets. He said he thought I was running away from something. I said no, I’m running to something, running to.

It’s not one epiphany on a mountaintop. It’s a meal, a train ride, a conversation. Small revelations. 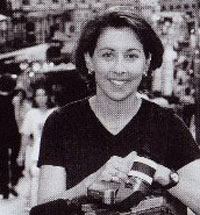 Jennifer S. Deayton is a writer and filmmaker living in Hong Kong. Her fiction and nonfiction have appeared in The Stockholm Review of Literature, Gravel, Prairie Schooner‘s “Briefly Noted,” and the Signal 8 Press anthology How Does One Dress To Buy Dragonfruit. She also writes for food and travel shows, blogs at www.therockmom.com, and makes short films. You can find her work here. (updated 9/2015)