There you go, down the road, wobbly fast on your bicycle, the Joker laughing behind you. The bike is fire engine red with a yellow flame at the back, the same colours as Superman’s S, with a great big noisy bell you love to ding-a-ling. You’ve had it three years now, yelped like an eejit when you got it, cried like a baby at its first scratch. But you were a little kid then. You’re much bigger now, grown so much the seat and bars are all the way up as high as they can go.

The back wheel makes a great noise when you put a playing card on it. For some reason the Joker is the best, you don’t know why, one card is as good as another, but anyway you love the thrashing clack-clack-clack of it like a motor engine, and now whee! you’re zooming down the hill, then to Mr. Ibrahim and his slick-back hair and his wee white smile and you’re counting out loud, pacing the journey. Eighty-nine spins of the pedals is the fastest you’ve done from your front door to his, and you just know it’s the Joker’s smile that sped you up.

You like Mr. Ibrahim and Mr. Ibrahim likes you. He always smiles his wee white smile at you and Mammy when you walk by the shop, and he always gives you a penny sweet when Mammy sends you down to get the messages. Tell your mother I will have her slices done just right for her, says Mr. Ibrahim, and this part you love, almost as much as you love the Joker grinning in the back wheel of your bike, the whizz of the cutting and the ham flopping out from one end, like a big dog sticking out its tongue. The wax paper has the feel of something slick, like wet leaves, and the pink smell of the meat sends your tummy into a growl.

Your mother, she’s a proper elegant lady, he says smiling, and you’re lost in his wee white shiny teeth.

He’s not big like Daddy and his face is a squashed football and he always smells of lemons even though he doesn’t sell lemons. I swear he uses Persil for deodorant, Daddy says, probably cuts a hole in the box and rubs the stuff all over.

Clack-clack-clack goes the Joker and you’re pedalling hard now, uphill back to home, heaving and puffing and struggling, but you can see the steeple waving at you from the rise of the hill, and you know all you have to do is count backwards now, ten more pedal-spins to the top, ten nine eight puff again seven six five huff again four three two where’s Daddy is he home yet you wonder . . . and one! woo-hoo!

Mammy takes the ham slices from you and kisses your head. She’s beautiful. You know because the men outside Mackey’s pub always smile at her and touch their caps when she passes and you heard one of them call her a fine thing. Her eyes are big and blue like the sky in summer. You tell her Mr. Ibrahim says she’s a proper elegant lady and her big blue eyes go even bigger and she gives you a queer look.

You saved your penny sweet until you got back, until you’d huffed against the wind and whizzed past the church and now you’re back and it’s warm inside and you’re sweating a bit, and the cola sweet fizzes in your mouth and you’re hanging on for Daddy to come home. From when you’re home after school to when he gets back from work is sometimes as long as four hours. You tried to count it once in seconds but you lost your way somewhere around seven hundred.

Daddy thunders in the door and yells for the Champ. He gets down on his knees so his head is level with your head and puts his hands up and calls for a left-right combo, clench your fists like this, thumbs to the side, double-quick speed, keep your guard up, you can hit harder than that, that’s it, again, now show me your footwork, and so you shuffle your feet. That’s you, his champ, could knock out both Muhammad Ali and Joe Frazier together, one hand tied behind your back, king of the ring, no rope a dope you, no sir. You laugh and Daddy laughs and Mammy’s behind him and you can see how lovely she is, and you love the rough feel of Daddy’s jaw when you hug him, the rasp of stubble against your face and you want to push at it with all your strength. Daddy is suddenly up and says, And it’s time now to show me your footwork, Missis, and he has his hands tight around Mammy, humming and singing that song about how he wants to dance with her cheek up against his cheek, and he’s moving her fast around the kitchen. I’ll spread your cheeks too, he says and Mammy pushes him away and calls him a shocking creature and her face is red now, as red as your bicycle and Daddy’s laughing and Mammy’s hand is to her mouth, a proper elegant lady.

When there’s too many messages for you to carry on your bicycle, Mr. Ibrahim drives up the hill in his clattery car with the stinky exhaust. It smells like curry, says Daddy. But sure he’s what you’d call exotic, isn’t that so, Annie?

You help Mr. Ibrahim carry stuff in and he says, Hold on now, and reaches into his pocket and pulls out a whole bag of fizzy colas. You bound upstairs to count them. Twenty-two! You can hear Mammy and Mr. Ibrahim downstairs laughing. Mammy’s laugh is so lovely, so high and tinkly like a bird. Not a crow or a magpie but a nice bird.

Mammy sits on the end of your bed. She’s twisting her apron in her hands, little creases of flour and a bright red splotch from where she wiped jam. Mammy looks at you and she’s smiling but her mouth is twisted like the smile is cutting into her face. You’re a good boy, she says, and she holds you in a stuffy hug.

The things you say, you don’t mean them sometimes.

That camel jockey’s some chancer, says Daddy, his back to you as he opens the fridge. Happy to sell you ham but he won’t eat it himself. Smiles at us and takes our money while he’s damning us as infidels. No pork. No booze. Fecker probably doesn’t even dance.

Oh he does, Daddy, sure Mammy and him were dancing cheek to cheek today right here in the kitchen.

Even when the words come out of your mouth you want to swallow them back. You put your hands out to hang on to them but you’re too late. They hover between you and Mammy and Daddy, and Mammy’s hand is to her mouth and Daddy is just breathing something fierce out his nostrils, his hands by his sides fluttering.

Upstairs, sonny, off you go, he says, and he pats your head but it’s not like when you show him your footwork, he doesn’t want to see your left-right combo now, he just wants you to go, and Mammy has that knife smile on her, and you hump up to your room.

One two three and on you count, the fizzy cola sweets spread out on the bed like dead soldiers, but the voices downstairs aren’t getting any quieter. Mammy isn’t laughing, there’s no nice bird tinkly laugh humming up from the kitchen, and Daddy’s voice is low and gritty. Try counting backwards from a hundred instead. A hundred. Ninety-nine. Ninety-eight. One time when you were little you broke a plate by accident and Daddy yelled the f-word but then he smiled and said, Ach you’re a nincompoop. Ninety-seven. Ninety-six. Ninety-five. Mammy’s voice is quiet and high and you don’t know how but you can hear it and not hear it at the same time.

What about Mr. Ibrahim? you asked her when she sat on the end of the bed. Do you love him the way you love Daddy? And Mammy said, No don’t be a nincompoop, and you hated that she called you that because that’s only for little kids and you’re not a little kid any more.

Suddenly a noise leaps up the staircase, something sharp like the snap of the Joker against the spokes but a hundred times louder.

Here you come, down the road, wobbly fast on your bicycle, the Joker screaming at you in the rain. You’re skidding and sliding and racing down the hill. Mr. Ibrahim’s outside the shop bringing in bales of newspapers. Twenty-two, you say. There were twenty-two fizzy colas, that’s what I came downstairs to tell you and mammy, that’s all. He hides his wee white teeth from you and a stream of rain splashes off the awning and onto his slick-back hair.

You race up streets and up the lanes and across the bridge over the bubbling river-roar and down down down to the woods. You used to be scared of the woods, but you were only a kid then. The woods is just the woods now, full of gnarly old trees and dead branches and birds singing and the splatter of rain on leaves and running off your head and down your neck, shivery cold. You throw the bicycle to the ground and the back wheel is in the air, spinning, and the clack-clack-clack of the Joker is yelling at you, and you dive into a hollow and taste the brown lump of leaves and the twigs are cutting your hands and you don’t care.

You take the packet of sweets out of your pocket, count them, ring them around the trunk of the oak, let the rain splatter on to them. Their fizzy tang wafts up and you lick your lips and think maybe you should keep just one for yourself.

The rain is slapping at you now and the woods are alive with the noise of pelted leaves. You should do a stop-rain dance. Do that, a stop-rain dance, a halt-the-world dance and a freeze-time dance and a make-the-Earth-go-backwards dance, like Superman did to go back and save Lois. That’s what you need, a spell to turn the clock back and make Mammy jump up from the floor and Daddy leap back from her, the two of them dancing in the kitchen, Show me your footwork woman, and then you know if only Daddy will look at you and bend down and hold his palms out to let you give him your left-right combo you can shuffle for him and hug him tight and kiss him on the neck the grizzly chin rough on your face and you can grab him and then grab Mammy’s hand and hold them together Mammy and Daddy will love you again and they’ll dance cheek to cheek and Mr. Ibrahim will come clattering by with his wee white smile and some messages for us all and it will be all okay, it will be all okay, it will be all okay. 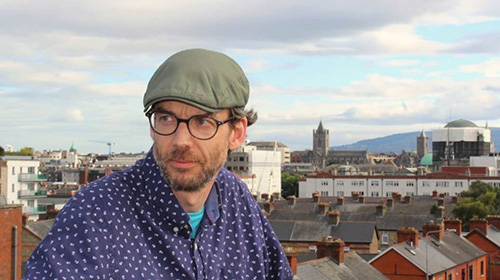 Niall McArdle’s fiction has appeared in The Irish Times, Banshee, AGNI, Spontaneity, and Phoenix Irish Short Stories, and has been broadcast on RTÉ Radio. He is the winner of the RTÉ Guide/Penguin Ireland Short Story Competition, and has been shortlisted for the Cúirt New Writing Prize, the Francis MacManus Short Story Contest, and the Hennessy Literary Awards. He lives in Dublin. (updated 1/2019)