He sits in his study, spiral notebook on his desk, pen resting on it, frozen gaze, nothing added to the page since yesterday. He appears besieged from inside. “What is it?” I ask. He looks at me, but says nothing.

Next day, his spirals are stacked on his desk. He’s reading through them, a trace of searching in his gaze. He doesn’t see me watching, and I leave him there alone with them. He’s never wanted me to read his notebooks, his life’s course chronicled in their pages. I don’t want to force my way in, and I’ve seen it as good that he’s been interested in them, a way of making sense of things, of himself, I imagined, some foothold on his existence. But now?

Second day of reading the notebooks. I interrupt him.

He raises his head, his face telling me he wished I hadn’t asked. He’s never talked much, never felt at ease explaining or expressing himself. More comfortable with me than with others. Aloof, though not in an affected way. I go to his desk and kiss him.

“Anything I can do?”

I tell him I hope he finds it, wanting a reaction, and he smiles at me and then goes back to his spiral, an old one written decades ago.

He’s put more work into the notebooks since he retired from public service. He’d never say he retired to devote more time to them, but I know he wanted to see where they would go. He must have had catching up to do and thoughts he wanted to add now that he has time to reflect on them. He’d always shown a tendency to become absorbed in the world in his head, people talking to him in there, arguments escalating, narratives unfolding. He couldn’t live them all, couldn’t let himself wander wherever his mind took him. In his notebooks he could release what was in his head, but he kept them to himself.

That night in bed, I make an effort to hold him. I embrace him almost the whole night. We change positions, but I keep my body against his. In the morning he kisses me. “It helps,” he says. He gets up, goes through the paper during his bowl of cereal, then disappears into his study to read.

Nothing stirring for a couple of hours. I hesitate to go in there, don’t want to pressure him or make him feel spied on. I want to see his face, estimate his gaze as he assesses what he’s written, his thoughts, his nature spilling out into a form he’s taken some care with. From the kitchen I hear him turning a page now and then. I feel ridiculous standing at a distance listening to him, or listening to his silence. Does he sense that I’m there? Am I distracting him? I go to his door and he hears me and looks up.

“I want to help,” I say, and take a step toward his desk.

I can see he’s not having a good day, the pages worrying him, an inkling of defeat on his brow. I nod, suspended in the silence.

“I appreciate it,” he says.

The reading continues into the afternoon. A sigh comes from the study occasionally, and muttering. From the sound of it, my guess is that he’s angry at himself.

At last he emerges, looking as if he doesn’t know where he is. Of course he knows he’s in our house, but within himself, where is he and how did he get there? How did this happen? he seems to want to know. Have his spirals made him wonder? If I’m right he doesn’t expect answers from me, and he doesn’t want me staring at him, trying to read his mind. He says he has some books on hold at the library.

“I need to read something else,” he says and tries and fails to chuckle at himself.

He gets his keys and wallet and gives me a quick kiss, holding my hand tight for a moment before he leaves.

The following day, I stick my head into his study and tell him I’m on my way out for lunch with a girlfriend. He doesn’t look as if he remembers that I mentioned the lunch to him yesterday, but I know he’s been distracted. I leave him occupied with his spirals, the image of the winding wire binding staying with me as I drive.

Two hours or so later I’m back; the house is empty, his car not in the garage. He’s probably gone to Costco to buy the quinoa salad he likes. I can’t know when he’ll be back, but I go into his study anyway and look in his closet for the spirals. When he returns, I’ll hear the garage door going up at the rear of the house and I can put a spiral back in the stack and get out before he comes in. But I can’t find them. They’re not on the shelf where he usually stores them, and I don’t see them anywhere else. He has a couple of storage tubs of old papers, and I pop the lid off the top one; no spirals, and same thing for the one on the bottom. I try his desk but don’t see them in any of the drawers. Then I hear the door rolling up in the garage and shut all the drawers and make sure everything’s in place. I go to the door and greet him.

It troubles me that I’ve snooped in his study. Why not just talk to him, say I’d like to know if what he’s reading in them is weighing heavily on his mind, affecting him in a way I should know about? As I searched for the notebooks I feared finding them. Am I prepared to read what’s in their pages, to understand why he may have turned against his own story? Also troubling is the thought that he could have destroyed the notebooks or thrown them away. Did he take them somewhere in his car and drop them in a dumpster? What would that imply about how he sees his life? I give it thought and decide what I’ll say to him.

He’s in his study, seated at his desk, nothing in front of him. He stares ahead, looking stripped, abandoned. Or has he abandoned himself?

He pauses, choosing words to fill the gap without provoking more questions. I could be wrong, but I don’t think so.

“Something’s changing with you, and I think it has to do with your notebooks. Do you want me to leave you alone? I can do that, but I don’t want to.”

“I threw them out. I can’t continue to delude myself that I was headed somewhere with the notebooks. I read through them all, and at the end I couldn’t stand to look at them. Still, they’re running through my head. I can’t get away from them so easily. I don’t know what else to say, but I can tell you that much at least.”

“Did you hope they’d be more than a record of your memories and experiences?”

I can tell he doesn’t want to answer, uncomfortable that he’s exposed as much to me as he has. He’s conflicted, not wanting to put me off, not wanting to let me in. Is he right? Should he keep his mouth shut rather than satisfy my curiosity? What next then? Can either of us forget what we’re talking about now? Does he plan to sit at his empty desk and stare into the void left by his notebooks? Maybe he needs time to grieve for them.

“You’ve always been patient with me,” he says. “More so than I deserve.”

“Where are they? Can I get them back?”

“They’re in the recycle bin in the driveway. But leave them there.”

“I want to read them. Are they embarrassing? I don’t want to embarrass you.”

“They’re worse. It’s mainly because of everything that is not there. I would hate for you to see me that way. I should have burned them when you went out to lunch.”

“If you don’t want me to read them, I won’t. But in your mind they’re still with you. I’ll get them out of the bin and we can burn them together and you can mourn them.”

“Do you want me to bring them back in?”

While he’s taking a nap, I go out the door to the backyard and unlock the gate, two tote bags in hand. I’m afraid he’ll wake up if I run the garage door up and down. I tip the recycling bin on its side, fish out his notebooks and stuff them in the totes. I hide them in the corner of a closet.

The next couple of days he rereads a novel by Kafka, his favorite, for maybe the tenth time since we’ve been married.

Three days after I retrieved the notebooks, late afternoon, I hear him snoozing in his study. He’s muttering something, probably dreaming, but who knows where the words come from? I creep close enough to hear him better. It sounds like course or source or curse, and he repeats the word or words.

His manner’s changed during dinner, his gaze thawing, signs of life beneath his eyes.

In the morning, before we get out of bed, he asks me, “Do you have them?”

I’m reluctant to answer. The recycling truck passed yesterday. Has he been waiting for it?

“Did you read them?”

“You knew I’d regret not having them, didn’t you?”

“I didn’t, but I knew that if you changed your mind after they were gone you couldn’t get them back.”

“I can’t erase or deny what they say with some symbolic gesture. I need to see them and remember them, the wrong turns and disconnections. Wherever they’ve been so have I.”

As soon as he goes to his study after breakfast, I bring the tote to him. He removes the spirals and puts them on their shelf in his closet. Then he sits at his desk and pulls a new spiral notebook from a drawer. He seems at ease opening it to the first page and reaching for his pen as I watch.

“I’ve surrendered to myself,” he says. “I’m starting again.” 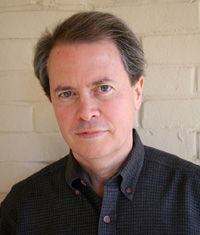