Is it too late to learn how to clean a trout?

“A summer romance, then,” her friend Valerie says.

“It would appear so,” Corinne says.

“I’ll look forward to it,” he’d said of the ratatouille. Kissing her just below her ear, causing her to melt—ridiculously. What more did she want for two bucks? Than to think that the ratatouille might be possible.

As when her blood is drawn, Corinne can’t look. She might faint if she sees her flesh squashed between clear plates. She stands almost casually, hand on the bar as instructed, gaze over opposite shoulder as though posing for an artist. Hold still hold your breath exhale step back. The tech maneuvers her into a different position for another view, apologizing for her cold hands.

Or the other way around: a house she drives by twice a day, and then it’s just—gone. Razed. And she cannot cannot cannot remember even the color of it.

Lou the dog, named by her daughter, a die-hard Lou Reed fan. It’s stupid, how much she misses him. The dog, not the musician.

Though she misses him, too. Dead at seventy-one. Is that old? Not anymore.

All the ways I’m sad and made you sad.

At work the next day, she finds it difficult to look at him.

Finally, the radiologist arrives and takes over, honing in on the spot. She places the “+” sign in four corners and snaps a picture.

“This is good news,” the radiologist says. Corinne smiles, nods back. She isn’t sure what pathology is indicated by the fact that she’d like to stay here on this padded table for just another minute, the women tending to her, the reassurance that comes so easily, at least for now.

“Which one?” Corinne says.

“This one. Fourth ex-husband from the left.” They laugh and laugh.

And what mistakes she had made, always hanging on too long, never wanting to let go, even when it was past the point of letting go. Far past.

Anyway, what’s the point, without Lou.

None of the students thinks to write: “An animal used to live here.”

But he hadn’t run like that for a long time.

“I adore you,” Corinne says, “and not just because of that insane chocolate cake.”

It doesn’t matter now, of course. But did she?

However. If she leaves the car, she will have to walk to her office, down the hall from the sex-dream co-worker, who is much younger than she is and probably thinks of her as, well, old. She does not feel old. She feels old. She feels the same as she has always felt.

Still, it was good to see him. He looked well.

In the dream, he said he loved her.

When she wrote the email, she’d imagined her future self reading it, so the tone is apologetic, mincing.

She skims, afraid of what she might find out—that last year’s self’s expectations hadn’t been met.

In some ways, the letter has proven prescient enough. She has taken steps. Made progress. She goes to yoga twice a week. And so on.

The former students are all receiving their emails today too, poor dears. They, no doubt, overestimated.

At the end of the email, a donation is requested. So that the organization responsible for sending the email can continue providing this questionable service. She is also offered the chance to write another message, to another future self. She pictures them, dozens of future selves opening dozens of emails. Mise en abyme.

Of course, she’s moved around a lot. There are a lot of addresses stored in her memory bank, and the constant withdrawals have left her depleted.

Corinne thinks, I mean—really? After all the mornings you’ve served me coffee, you don’t know me, or my come-back cup?

Always she feels chastised, like a child, even when she’s the oldest one in the room.

Read any good books lately? If not, maybe go to the library and find one.

Did you get a dog yet?

I hope the breath is moving in and out of your lungs with ease. I hope your legs still work, knees and hips and feet, and that you’re taking a walk every day.

And enjoying a meal out, now and then.

And using your hands. Gardening. Something with clay, or paint.

I hope you aren’t confused by this letter because you’re suffering from dementia or grieving such a monumental loss that the language of hope is incomprehensible to you.

I hope you are well, and if you are not, I hope you will get help this time.

His head in her lap. The bright yellow band around the catheter in his arm. Leg. His leg. This made it easier to inject the overdose of anesthesia. The vet explained, in a gentle voice, what would happen. One breath, maybe two. Oh, it was quick.

No need for that stethoscope, she wanted to say. You can put that away now.

Goodbye, Lou. Thank you for being such a good friend.

“Stay as long as you need to,” the vet said, closing the door quietly behind him.

But what was the point in staying? Lou was no longer there.

“What the hell?” Valerie asks.

Corinne explains that the birds have found a crack somewhere. They’re picking and plucking at the innards of her house, building nests beneath the rafters.

“They’re turning your house inside out,” Valerie says.

“It would appear so,” Corinne agrees.

They met almost exactly a year ago now—right after Lou died. Robert was kind. He understood, how it wasn’t just about the dog.

She ponders the self who typed that imperative, who made a special point to use uppercase. She looks out her kitchen window at the flats of impatiens and nasturtiums, waiting for her in their little plastic cups, and the grass—so green from all the rain! 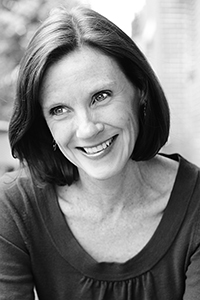 Susan Jackson Rodgers is the author of the novel This Must Be the Place (Switchgrass Books, 2017) and two story collections: The Trouble With You Is (Mid-List Press, 2004) and Ex-Boyfriend on Aisle 6 (Press 53, 2012). Her writing has appeared in New England Review, Colorado Review, AGNI, Prairie Schooner, Brevity, and elsewhere. She is professor of creative writing and literature at Oregon State University. (updated 4/2020)