All of us brides had our dresses made in town, but only some had sheer mesh bodices, studded with sequins and beads. All of us grooms wore rented tuxedoes, except Dmitri, the dandy, who splurged on silk at Modern Man.

Pasha had to climb nine flights to collect Lena, and when he arrived her mother demanded an old-fashioned ransom. “Five hundred rubles!” she boomed, and Pasha felt blindsided but also rather fortunate he’d thought to stop at the bank.

Nobody’s car was more audacious than Natasha and Ivan’s Hummer, a bulwark of white against the Soviet past. Most of us had plastic ring ornaments on our hoods, but theirs was so huge it had to go on the roof, a glimmering beacon for many blocks, barely clearing the railway bridge by the river.

Everyone liked posing on the chaises in the wedding palace lobby, but Mariana liked it the most. As a girl, she’d been a gifted ballerina, and now she arched her spine and extended her leg backward, her swan pose having never looked better. On her chest a great jewel buzzed, like a bulb just before it goes out. She’d always been like that, even as a girl, forever on the verge of being over.

We went in two by two as we were called, never ahead of schedule or behind. Sergey, who was always sober, was the drunkest when his ceremony began. Anya’s brothers had brought him bottles as gifts and kept demanding he make a toast. “To stability!” he finally hollered, noodling to the side. There were tons of brothers, maybe five, all wasted in some way themselves, and every time we turned around one of them was clobbering him with a hug.

In the registration room, the government official stood in stilettos under the double-headed eagle and spoke plangently of family and forbearance. This was a surprise: we’d expected a bureaucratic drag. But she was good, very theatrical. Some of us even got tears in our eyes when she presented us with our licenses. We stepped forward; we tried to act proper and mature. We signed our names as formally as we could, and then we kissed, the more nostalgic of us holding longer, trying to shore up the memory with our youth, the more complacent already rushing ahead—to drive the city, to dine, to dance.

We made a splendid cavalcade in our limousines, honking our ring-tone horns at stray passersby and especially at each other. At the war monument we lay red carnations in memory of our nation’s fallen heroes, though Yura and Sveta, who spoke of Pushkin like a friend, went a step further and brought a poem in a frame.

The first Katya and Sasha embraced atop the BT-7, while Andrei and Stasya took the less flammable T-34. By nightfall, every memorial tank in Krasnoyarsk had been photographed with newlyweds, and the other Katya, whose penchant for cosmic thinking usually tripped her into free falls of despair, on that vaunted Friday in June happily thought of us all as her other selves: we infinite pairs, moving about the city, embarking on parallel lives we might have swapped had we held different places in queue.

We, her fellow luminaries, her comrades—though of course that’s a word we don’t use anymore. 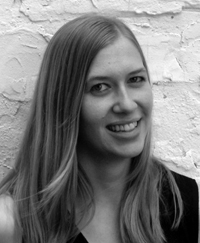 Katherine Hill’s fiction has appeared or is forthcoming in n+1, Colorado Review, The Common, Philadelphia Stories, and Word Riot. She lives in Philadelphia and is nearing the completion of her first novel. Find her online at www.katherine-hill.com. (updated 1/2012)