My son is trying to write a joke. He thinks this will help him make friends and let people know he’s friendly. He wants me to tell him if the jokes are funny. He doesn’t know whether I am being sincere most of the time, so he asks me to clarify.

He says, “Mommy. What does the scarecrow say to the pigeon?”

I tell him I don’t know.

I tell him I don’t think that’s a funny joke.

“What if I make it a mommy scarecrow? Will you like it then?”

He thinks if it relates to me, I will like it better. “I don’t think that’s quite it, honey.”

He frowns, and I feel motherly guilt at having betrayed my child. I want him to go on. I love hearing him actually talk.

“I think you need to think about the scarecrow,” I tell him. “And think about what a pigeon would say to him.”

He kicks the back of the passenger seat. His Sketchers have scuffed up the vinyl back there. “But pigeons can’t say anything.”

“Yeah, but it’s a joke. It doesn’t have to be realistic.”

“But your punchline is the scarecrow’s loneliness. Which is good to talk about, but it isn’t very funny.” I adjust my rearview mirror so I can focus on the road and still look into his eyes.

He says, “No. The scarecrow wants to be alone.”

“Why did they let a duck into the bar?”

“I suppose they needed the business.”

He approves of this and gives me a look like Go on.

“So, a duck walks into a bar, and he asks the bartender, ‘Got any crackers?’”

“Ducks eat crackers?” He pulls at the buckles on his car seat. The seat is a little too snug. I should get him a new one, but he’ll just grow out of it and need a booster seat. It adds up.

“Do you remember when we fed the ducks at Riverside Park?” I say, referring to a time when ambulance sirens sped by and my son scratched in the mud until his fingers bled.

He makes eye contact through the rearview mirror, which I take as affirmation.

“I guess crackers are a type of bread that this duck likes. It’s not really important to the joke. The point is, the duck asks the bartender if he has any crackers. The bartender says, ‘We don’t have any crackers, man.’”

I wait for an interruption, but my son just looks out the window.

“So, the next day, the duck goes back to the bar. He, you know, waddles up to the bartender and says, ‘You got any crackers?’”

“But they didn’t have crackers. This duck is getting unrealistic expectations.”

I can hear the therapy sessions my ex is paying for. They’re trying to name what they think is wrong with him.

“That’s part of the joke,” I explain. “So the bartender sighs and says, ‘No, we don’t have any crackers.’ And the duck walks away.” We approach a stop sign, so I turn around for effect. “Now, the next day, the duck does it again. Okay?” When a car comes up behind me, I twist forward and clear the cross street. “The duck walks into that bar and asks the bartender, ‘Got any crackers?’”

“There’s just one bartender who works there?”

It’s a good question, so I consider before saying, “Yes. He owns the bar. He’s very protective of his business, so he’s there most of the time. And he happens to be there each time the duck comes in.”

He tightens the right side of his mouth, so I know he believes me.

“The bartender tells the duck, ‘We don’t have any crackers, and if you come here again asking for crackers, I’m going to staple your bill to the bar.’”

“The bar means the building?”

“In this case, the bar means the actual countertop. You know, where they serve the beers and stuff?” I make a left turn, approaching the cul-du-sac. “So he says, ‘I’ll staple your bill to the bar.’ And the duck says, ‘Okay, okay, I’m leaving.’ Now here comes the next part. Are you ready?”

He almost throws my train of thought off, so I ignore this, feeling guilty about it, and deliver the last part. “The next day, the duck comes back to the bar.”

“Even though the bartender said he will hurt him?”

“Yup. The duck comes back to the bar and goes up to the bartender and asks, ‘You got any staples?’”

“I thought he wanted crackers,” my son says. “Why does he want staples now?”

“Just listen, honey. So the duck asks the bartender if he has any staples. The bartender says, ‘No, I don’t got any staples.’” A speech therapist warned me not to talk with any kind of dialect around him, because “we want him to develop good speaking habits.” I’ve been self-conscious of every word for the past six years. “The duck says, “Okay, okay. Well…you got any crackers?”

“Yes. But the punchline for the joke is that the bartender doesn’t have the staples he threatened to use on the duck.”

We approach the condo. I park the Honda and unbuckle my son. His brow is furrowed. I ask him what he’s thinking. “So he can’t hurt the duck? The duck is safe?”

“Are you ready to get out of the car?” I ask as I unlock the doors.

“Almost,” he says. Which, usually when he says this means it will be a few minutes. I’m feeling unusually patient today, so we sit in the car. My son says, “I think I understand. I have a joke.”

“What are your thoughts?”

“A pigeon meets a scarecrow.”

“And what does the scarecrow have to say about it?”

“The scarecrow says, ‘Yes, but I’m stuck on this cross.’”

I know where he learned a word like cross. My ex has started going to church with his new girlfriend.

“The crow leaves and comes back the next day and asks for bread, but the scarecrow says ‘I’m stuck on this cross. Can you help me down?’”

“So. The crow flies away, and then comes back and asks for bread.”

“Does the crow get bread this time?”

“No, he takes the scarecrow’s hair.”

“He takes his hair?” I act appalled.

“Yes. The crow takes the scarecrow’s hair and builds a nest for her babies.”

“So now what? Given the scarecrow doesn’t have his hair and he’s still up on his pole?” I don’t say cross. I consider saying stake but don’t want him to confuse it with steak and invent more dialogue he doesn’t want. But then I consider if I should have said stake anyway because the mixup would mean more time in the car. Considering this, I miss his explanation. “I’m sorry, honey. Would you repeat that?”

“I said, when the scarecrow sees the babies, he doesn’t feel bad anymore.”

“I’m not done.” This should have been obvious to me. His little face is perplexed.

The garage door opens to my ex’s house, my former home, the place we bought together.

“Okay. Okay. When the baby birds grow up, they pick up the scarecrow. All of them together. And they carry the scarecrow off his cross and fly him up to heaven.”

I reach into the back and push the red button that unbuckles my son. It pops, and he clicks the upper latch and slides the straps off his shoulders. I love him, and I tell him I love him.

I don’t expect him to say he loves me back, but I want him to know that I love him. He opens the car door, hops out, and saunters into the garage. I see Kaitlyn from the window. She waves. I hold up my hand. 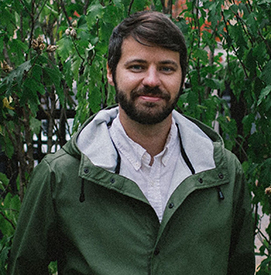 Joshua Bohnsack’s work has appeared in The Rumpus, Hobart, Salt Hill, and elsewhere. He is managing editor of TriQuarterly and publisher of Long Day Press. He grew up on a farm and moved to Chicago. Read more at joshuabohnsack.com. (updated 6/2021)